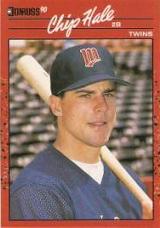 Chip Hale was signed as a 17th round pick in the 1987 amateur draft by the Minnesota Twins and scout Jesse Flores Jr.. He played parts of seven seasons in the majors, from 1989 to 1997, all with the Twins except for the final one, when he was with the Los Angeles Dodgers. He never appeared in more than 85 games in any season, and overall hit .277 with 7 homers and 78 RBIs in 333 games.

Hale managed the Missoula Osprey in 2000. He managed the Tucson Sidewinders from 2004 to 2006, leading the club to the Pacific Coast League championship in his last year and winning Manager of the Year honors. In 2007, he was promoted to the Arizona Diamondbacks major league coaching staff. In 2010, he moved to the New York Mets, and two years later, he moved on to the Oakland Athletics where he was the bench coach in 2013 and 2014.

On October 13, 2014, he was hired to be then new manager of the Arizona Diamondbacks, starting with the 2015 season. He replaced Alan Trammell, who had taken over for Kirk Gibson for the last three games of the 2014 season. The D-Backs had a good year in 2015 finishing 3rd in the NL West and showing a lot of promise, but after making a number of high-profile moves before the 2016 season, that season was a major disappointment, marked by injuries and poor performances by some key players. By the end of July, rumors began circulating that Hale's job was in jeopardy as a result and he was fired one day after the season ended.

Hale returned to the majors as third base coach for the Oakland Athletics in 2017, then was appointed bench coach of the Washington Nationals in 2018. In 2020, he moved to third base coach.