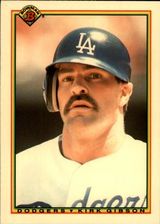 Kirk Gibson logged 17 years in the majors while compiling a solid and memorable baseball career. A power hitter who hit over 20 homers in five consecutive seasons, he also possessed outstanding speed, posting three seasons of 30-plus steals. Although he never achieved 30 homers or 100 RBI in any season, he proved to be a solid batsman who frequently got on base. Undeniably, his main calling card was his competitive fire and sheer will to win - sometimes to a fault.

Gibson played 12 seasons for the Detroit Tigers, including in their impressive 1984 season when they had 104 victories and easily won the 1984 World Series. He first came to national prominence as a player when he had a tremendous second half in 1981, when he hit a scorching .375. He had made his debut late in the 1979 season, then had hit .263 in 51 games in 1980 before his breakout year. However, he lost momentum when he missed half of 1982 with various injuries, including an intestinal parasite that sapped his strength. He then hit just .227 in 1983, but had his first outstanding full season in 1984, when he hit .282 with 27 homers and 91 RBIs in 149 games. He hit .417 with a homer in the ALCS against the Kansas City Royals, winning the ALCS MVP Award, and added a pair of homers in the World Series against the San Diego Padres. He also was a key player for the Los Angeles Dodgers in 1988 when he was named the National League MVP on the strength of hitting .290 with 25 homers and 76 RBIs after having been a victim of collusion as a free agent in the off-season. He hit just .154, but with a pair of homers, as the Dodgers upset the New York Mets in the 1988 NLCS, being bothered by a knee injury. That set the stage for his World Series heroics.

Gibson's pinch hit two-run homer off Dennis Eckersley in the 9th inning of Game 1 of the 1988 World Series gave the Dodgers a 5-4 win over the Oakland A's and propelled the Dodgers to a 4 games to 1 Series triumph over the heavily-favored A's. The 1988 NL MVP was hobbled by two injuries, one to his left hamstring and the other to his right knee, and it was considered a foregone conclusion that he would not be able to play. Few baseball fans will ever forget the sight of Gibson hobbling around the bases to the silken sound of Vin Scully's voice crying out, "In a year that has been so improbable, the impossible has happened!" It was his only at-bat of the series, but it didn't matter as the dramatic had broken the A's spirit.

There are three memorable calls of this legendary homer: Scully's national call on NBC-TV, Don Drysdale's on the Dodger radio network, and Jack Buck's call on national (CBS) radio. His famous words - "And the 3-2 pitch coming here, from Eckersley. Gibson swings and a fly ball to deep right field. Is it gonna be a home run? Unbelievable!! A home run for Gibson!!! And the Dodgers have won the game 5-4. I don't believe what I just saw!" Gibson heard Scully's broadcast, saying his injury was too severe, that he cannot play. He used those words as incentive to try hitting baseballs off a tee and prepare himself. Gibson's home run easily and repeatedly has been voted the greatest moment in Los Angeles sports history.

He was named bench coach of the Arizona Diamondbacks in 2007, then on July 1, 2010 succeeded A.J. Hinch as the team's manager. He helped engineer a turnaround in 2011, when the D-Backs won the NL West title and took the Milwaukee Brewers to the limit before bowing out in the NLDS. However, the team found itself with a .500 record in both 2012 and 2013, never really being in contention, and he was eventually let go.

He was also a television broadcaster for the Detroit Tigers from 1998 to 2002 and the Tigers bench coach from 2003 to 2005. He was diagnosed with Parkinson's disease early in the 2015 season, after having joined the Fox Sports Detroit broadcast crew. In 2016, he returned to the game as a guest spring training baserunning instructor with the Tigers. In 2018, the Dodgers celebrated the 30th anniversary of his World Series homer off Eckersley - arguably the most famous event to have taken place at Dodger Stadium - by installing a special seat in the right field pavilion painted blue and decorated with Gibson's signature. The seat was to be sold to fans as part of a special package that included a donation to the Kirk Gibson Foundation, to be used for research into Parkinson's disease. In 2019, he was named a special assistant to Al Avila, General Manager of the Tigers.

Surprisingly, Gibson is probably the best player - and is the only former MVP in either league - to have never been selected for an All-Star Game. He is also one of only a handful of players to hit 250 or more home runs and never make a big league All-Star team. It arguably reinforces the notion that he was a good, solid player who experienced a few great moments during his long ML career. The two most similar players through 2006, according to the similarity scores method, are Ray Lankford and Eric Davis.

Gibson was an All-American football wide receiver at Michigan State University and there was some speculation that he would choose professional football over baseball. In June of 2015, his son Cam Gibson was selected by the Tigers in the 5th round of the 2015 amateur draft.