"To [Drysdale] only the middle part [of the plate] belongs to the hitter; the inside and outside parts belong to the pitcher." - Dave Anderson, New York Times

Don Drysdale was a Hall of Fame pitcher who was one of the biggest names of the 1960s. He had movie-star good looks and sometimes appeared on television shows of the time. After his playing days he was a well-known broadcaster.

Drysdale, who spent his entire career with the Brooklyn and Los Angeles Dodgers, won the 1962 Cy Young Award in a year he went 25-9, but he had more impressive ERA's in several other years. He is #40 on the all-time list for most career strikeouts, and tied for #21 for the most shutouts. His reputation as a pitcher who wanted to own the plate is borne out by the fact that he is #17 on the all-time list for hit batsmen as of 2020.

During the 1964 season, the Dodgers had one of the worst hitting teams in the league, and Drysdale received little run support. On one occasion, Drysdale left the team to attend to personal business in Washington, DC, the day after he had lost a four-hitter in 11 innings to the Philadelphia Phillies. On that day, June 5, 1964, Sandy Koufax pitched a no-hitter. Drysdale did not know what the Dodgers had done that day until he returned to his hotel and watched a late night TV newscast. As quoted in the Associated Press on June 6, Drysdale said that after he heard on the news that Koufax had thrown his third career no-hitter, his first thought was "Did he win it?"

Drysdale was a good hitter (for a pitcher), with a .186 lifetime batting average and 29 home runs. On occasion, he was used as a pinch hitter, and once batted as high as sixth in the batting order. In his peak year as a hitter (1965), he hit .300 and slugged .508 during the heart of the deadball era and a year in which the Dodgers as a team slugged .335. He is the answer to a trivia question about the 1965 Dodgers, a good but offensively challenged team: Who was their only .300 hitter in the starting lineup in the first game of the World Series? Answer: Drysdale, who hit exactly .300 that year.

Drysdale shares the National League single-season record for home runs by a pitcher with another Dodger hurler, Don Newcombe, at 7. Newcombe, Drysdale's teammate in the mid-1950s, hit 7 in 1955. Drysdale did it twice, 1958 and 1965. The Major League record is 9 by Wes Ferrell of the Cleveland Indians in 1931.

Along with Bob Gibson of the St. Louis Cardinals, Drysdale had the reputation as being the meanest, toughest pitcher in baseball of his time. He invoked what might be called the Drysdale rule: "you hit one of mine, I hit two of yours." And the statistics back him up. He led the league in hit batsmen five times and hit 154 batters during his career. Gibson hit 102 and never led the league.

Drysdale and teammate Sandy Koufax held out together before the start of the 1966 season. This was a precursor to the growing bargaining power of the players that reached fruition during the 1970s with a stronger union and free agency.

Drysdale set two new major league records in 1968. His six consecutive shutouts (May 14 through June 4) still stand but his 58 consecutive scoreless innings (May 14 through June 8) was broken by Orel Hershiser twenty years later. Another record that he holds is the most seasons (14) played by a player who had only one manager in his entire major league career (Walter Alston).

Both Drysdale and Koufax retired young. Drysdale was only 32 in his last season as a major league pitcher, while Koufax was 30.

Drysdale died from a heart attack in Montreal, QC on July 3, 1993. He was in Montreal where the Dodgers were playing the Montreal Expos as part of the Dodgers' broadcasting team. He did not report to Olympic Stadium that day and was later found dead in his room at the team hotel. Vin Scully broke the news of Drysdale's death live on air during the game that Drysdale was to announce with Scully. His death came one week after the death of fellow Dodgers Hall of Famer Roy Campanella.

He was elected to the Baseball Hall of Fame on January 10, 1984 by the Baseball Writers Association of America.

"The trick against Drysdale is to hit him before he hits you." - Orlando Cepeda 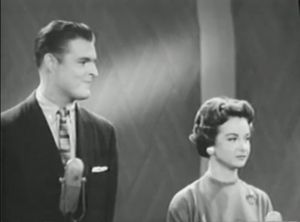 Drysdale's good looks and ready availability to Hollywood made him a natural guest star on various television shows in the 1960s. He was on Leave it to Beaver in 1962, The Donna Reed Show in 1964, The Flying Nun in 1969, and The Brady Bunch in 1970, among other shows, all as himself. He also portrayed characters over the years, in shows such as The Rifleman starring ex-Dodger Chuck Connors.

He also appeared on an early episode of "You Bet Your Life" with his first wife Ginger, which aired 26th February 1959.