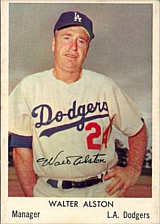 "He is non-irritating. Do you realize how important it is to have a manager who doesn't irritate you?" - Dodgers owner Walter O'Malley about Walt Alston

As a player, Walter Alston had only one major league plate appearance, striking out against pitcher Lon Warneke. For his work over 23 seasons as the manager of the Brooklyn and Los Angeles Dodgers, he was elected to the Baseball Hall of Fame on March 10, 1983 by the Committee on Baseball Veterans.

Alston was born in Venice, OH (the town named Venice near Cincinnati, not the one in northern Ohio), and went to school in Darrtown, OH, not far from Venice. His father had played semi-pro ball. Walt was a basketball and baseball player as a youth whose fastball earned him the nickname "Smokey". He attended Miami University, also in the Cincinnati area, and was captain of the baseball and basketball teams, graduating with a degree and taking a job as a teacher.

He began in the minors in 1935, playing third base for the Greenwood Chiefs of the East Dixie League and hitting .326. Thereafter, he was primarily a first baseman, and in 1936 he hit 35 home runs with a .326 average for the Huntington Red Birds of the Middle Atlantic League. That earned him a shot at the majors in September.

Short time in the majors[edit]

Alston was a first baseman with the St Louis Cardinals in the 1936 season. He played his only major league game on September 27th, as a substitute for future Hall of Famer Johnny Mize, who had been ejected from the game. Alston struck out in his only at bat. He later claimed that immediately before striking out, he hit a long fly ball that landed barely foul; had it been fair, his career could have taken an altogether different turn.

Returning to the minor leagues, Alston led the Middle Atlantic League in home runs four times, RBI twice, and runs once. He hit 35 homers in 1936, 28 homers in 1940 (his first season as player/manager), 25 homers with 102 RBI and 88 runs scored in 1941, and 12 homers with 90 RBI in 1942. Smokey's minor league career lasted 13 seasons through 1947. He hit 176 home runs with a .295 average, primarily in the Cardinals organization but also with several years in the Brooklyn Dodgers organization. In 1941, 1942, 1944 and 1945 he also pitched 34 innings in the minors, hearkening back to his days as a pitcher in his childhood. He holds one home run record -- most minor league dingers by a player in the Hall of Fame.

Walt started managing during his playing career in 1940 and put in 12 seasons before he became a major league manager. During his six years at the AAA level, he got to know many of the young Dodgers who would play for him in the majors. For instance, he had a young Tommy Lasorda as a pitcher at Montreal every year from from 1950 to 1953. "The Rifleman" Chuck Connors, Jim Gilliam and Johnny Podres were other players on his Montreal teams.

Alston was named manager of the Brooklyn Dodgers for the 1954 season, a year in which the team went 92-62. In 1955, he led Brooklyn to the pennant and its first World Series championship; the team repeated as National League champions in 1956. After the Dodgers moved to Los Angeles, CA, Alston led the team to pennants in 1959, 1963, 1965, 1966 and 1974, and three more world championships (1959, 1963, 1965). He won seven National League pennants in his 23-year tenure as Dodgers manager. During that time, his teams had a losing record only four times, while winning at least 90 games in a season ten different times.

Named Manager of the Year six times, Alston also guided a victorious NL All-Star squad a record seven times. He retired with a few games left in the 1976 season with 2,040 wins, ceding the job to long-time Tommy Lasorda, who would hold it until 1995. He was well-known for signing 23 consecutive one-year contracts instead of going for an extended term, at a time in the game where managers were being guaranteed job security more often. This was an arrangement insisted upon by Walter O'Malley, initially as a manner with which to show departing manager Charley Dressen just who held the power when Charley had the temerity to ask for job security after the 1953 season.

As a manager, Alston was noted for his studious approach to the game (he had taught school in the off-season while in the minors). Dodger General Manager Branch Rickey and statistician Allan Roth would provide data to Alston for use in managing the team.

Some or all content from this article is licensed under the GNU Free Documentation License. It uses material from the Wikipedia article "Walter Emmons Alston". It has also been much expanded during its time here.