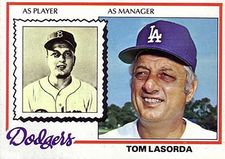 Inducted into Hall of Fame in 1997

"I bleed Dodger blue and when I die, I'm going to the big Dodger in the sky." - Tommy Lasorda

"Guys ask me, don't I get burned out? How can you get burned out doing something you love? I ask you, have you ever got tired of kissing a pretty girl?" - Tommy Lasorda

After his playing career, he became a scout, minor league manager, coach, manager, general manager and Vice President, all in the Los Angeles Dodgers organization. As a manager, in 21 seasons, he won seven division titles and proceeded to four World Series, winning two and losing two. His hobbies: home movies and good pasta.

"My heart bleeds Dodger blue," Lasorda has claimed, during his 35-plus years in the Dodgers organization.

Lasorda started in the Philadelphia Phillies chain with the Concord Weavers, going 3-12 for the last-place team in 1945. He then missed 1946 and 1947 due to military service. Returning to baseball, he looked like a promising pitcher on June 1, 1948, when, in a 15-inning game for the Schenectady Blue Jays (Canadian-American League, Class C), he struck out 25 Amsterdam Rugmakers, setting a since-broken pro record. He even drove in the winning run with a single. In his next two starts, he struck out 15 and 13, gaining the attention of the Dodgers. He was drafted by the Nashua Dodgers in the class B phase of the 1948 Rule V Draft off the Schenectady roster and sent to the Greenville Spinners in 1949.

Lasorda compiled a 107-57 (.652) record in nine years with the Montreal Royals of the International League, the Dodgers' top farm club, from 1950 to 1955 and 1958 to 1960. His best records were 17-8 in 1953 and 18-6 in 1958, when he led the league in victories, complete games, and shutouts and was named the league's Pitcher of the Year. Lasorda helped Montreal to the International League championship five times. He received only two brief trials with the Dodgers. Lasorda made it hard for the Dodgers to bring him up, since he was an immensely popular player in Montreal who made a point of learning to speak some French.

In 1954 he was a teammate of Roberto Clemente at Montreal.

Lasorda was demoted in 1955 to make room for bonus baby Sandy Koufax, then was sold to Kansas City in 1956, but couldn't stick with the Athletics or the New York Yankees either. Stuck in the high minors, Lasorda moved to Los Angeles a year before the Dodgers did, with the Los Angeles Angels of the Pacific Coast League. In 2006 he was elected to the Pacific Coast League Hall of Fame and in 2008 he was elected to the International League Hall of Fame.

After his second stint in Montreal, Lasorda became a Dodger scout in 1961 and then a minor league manager in 1965. As a scout in 1964, he discovered and/or signed Willie Crawford, Tom Hutton and Jim Strickland. Promoted by the Dodgers to coach in 1973, Lasorda served as Walter Alston's understudy until September 29, 1976, when Alston retired. The Montreal Expos tried to lure him away from the Dodgers after firing Gene Mauch following the 1975 season, but the Dodgers refused to let him leave, as they had other plans for him.

After becoming the Dodgers' manager, he won eight division titles and finished second thrice and third once through 1996. He inherited the infield of Steve Garvey, Davey Lopes, Bill Russell and Ron Cey that he had helped assemble in the minor leagues (although it was Alston who moved the four to the positions that would become associated with them), and he reacquired catcher Joe Ferguson, another of his protégés, to alternate with Steve Yeager.

In 1977 and 1978, he became the first National League manager to win pennants his first two seasons, but the Dodgers lost the World Series to the Yankees in six games each time. After the 1981 player strike, Lasorda's Dodgers defeated the Houston Astros in the divisional playoff; they then beat the Montreal Expos in the NLCS on Rick Monday's 9th-inning homer in Game 5; and then crushed the Yankees with a power display in the World Series. Lasorda won another World series in 1988, when they upset the New York Mets in a tightly-fought NLCS and then the Oakland Athletics in the World Series. That team relied on the pitching of Orel Hershiser and the emotional leadership of Kirk Gibson, whose pinch-homer off Dennis Eckersley to end Game 1 of the World Series crushed Oakland's spirit.

Lasorda managed the Dodgers to division titles in 1983 and 1985, but lost both times in the NLCS. In 1988, he shared National League Manager of the Year honors with the Pittsburgh Pirates' Jim Leyland and took the Dodgers to an upset win over the New York Mets in the NLCS and a shocking World Series upset of the Oakland A's.

He built his teams around pitching and defense with a preference for regular lineups that included nine Rookies of the Year. Bobby Valentine had a similar style as manager as he played for Lasorda in Spokane, WA in the mid 1960s for the AAA Spokane Indians of the Pacific Coast League. He was elected to the Pacific Coast League Hall of Fame in 2006 for his managing success: in four seasons, his teams finished first twice, second once and third once and won the league playoffs twice, in 1970 with Spokane and 1972 with Albuquerque. He is one of four permanent members of the Spokane Indians Rim of Honor, which was created in 2007. His greatest strength as a manager was his willingness to put young players in key positions and his biggest weakness was in-game strategy (a tendency to play small ball). A media favorite, Lasorda was noted for his good humor and his love of Italian cooking. (MC) 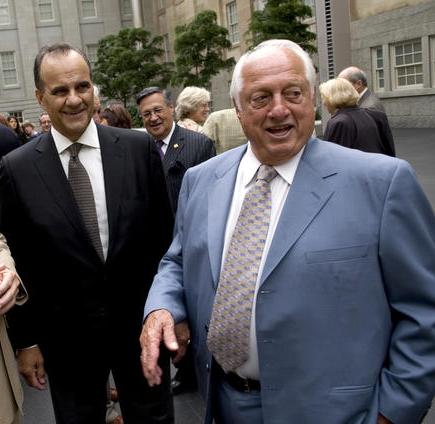 Lasorda was elected to the Hall of Fame by the Veterans Committee in 1997. After his retirement as a manager, he became a Dodgers executive, and his association with the club has spanned seven decades. He also managed the United States to its first-ever gold medal in baseball at the 2000 Sydney Olympics. That made him the only manager in baseball history to win a World Series (1981, 1988) and an Olympic gold medal (2000).

He was a close friend of the father of Mike Piazza (so much so, he became young Mike's godfather). He then saw to it that the Dodgers drafted Piazza as a favor to his dad. Lasorda was a regular member of The Baseball Bunch TV show with Johnny Bench. He served as interim General Manager of the Dodgers in 1998 after Fred Claire resigned. 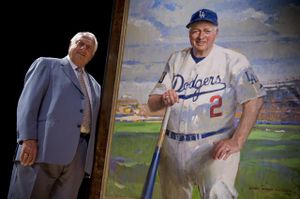 In 2006, Lasorda was the recipient of the Branch Rickey Award, which is given to the major league personality who best demonstrates exemplary community service.

In 2009, a portrait of Lasorda in a Dodgers uniform was added to the National Portrait Gallery in Washington, DC. In 2012, the Latino Baseball Hall of Fame topped that by erecting a statue of him outside its home in La Romana, Dominican Republic; the Hall gives out an annual "Tommy Lasorda Award" to a non-Latin personality who worked to promote the development of baseball in Latin America. In Lasorda's case, he was instrumental in having the Dodgers develop scouting in the Dominican Republic and establish the first major league baseball academy on the island.

On June 6, 2018, he became the oldest living Hall of Famer following the passing of Red Schoendienst. In November 2020, shortly after he was in attendance when the Dodgers won their first World Series title since 1988, he was hospitalized in the Intensive Care Unit of a hospital in Orange County, CA with an unspecified ailment.