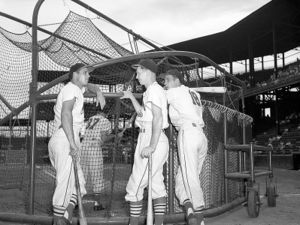 Red Schoendienst was involved in professional baseball for some 67 years as a player, coach, and manager. During most of that time, he was associated with the St. Louis Cardinals. His brother, Paul Schoendienst, was a minor league player and manager and another brother, Elmer Schoendienst, also played in the minors, as did his son, Kevin Schoendienst.

Schoendienst dropped out of school at 16 to work for the Civilian Conservation Corps to earn money while playing semi-pro baseball. He suffered a serious eye injury while working with one of his brothers on building fences and spent five weeks in a St. Louis hospital as a result. Doctors were able to save his eye, and when World War II started, he took a job at Scott Air Force Base near Belleville, IL. In 1942, he headed to Sportsman's Park with his brother Paul and another friend to attend an open trial put on by the St. Louis Cardinals. While he was not signed immediately, the Cardinals called him back a couple of weeks later. Head scout Joe Mathes handed him a contract, and he began his professional career with the Union City Greyhounds of the Kitty League.

Six games into his first professional season, the league folded, as did many minor league circuits during the war, but Red was lucky to be given another job, with the Albany Cardinals of the Georgia-Florida League. After only 9 games in the Piedmont League at the start of 1943, he was promoted to the Rochester Red Wings, the Cards' top farm team; of course, he had batted .472 for the Lynchburg Cardinals, prompting the quick promotion. He then led the International League in hitting, with a .337 average in 136 games. He was back with Rochester at the start of 1944 but was soon drafted, but hurt his shoulder playing ball for his unit's baseball team, and then aggravated the injury during basic training, making him medically unfit for service. Thus, he was back with Cards in 1945, and with so many players in the service, he started the season with the big league team. He would never play in the minors again.

He was named to ten All-Star teams and appeared in three World Series. He finished as high as third in the MVP voting in 1957. Although the large majority of his major league career was spent with the Cardinals, two of his three World Series teams were from his relatively brief time with the Milwaukee Braves.

In his most successful year with the bat, 1953 Red hit .342, good for second in the National League. He was a couple of points behind league leader Carl Furillo and a few points ahead of teammate Stan Musial.

"He's a plenty good batter from either side of the plate. We've thrown him everything in the book and he reads the riot act to us most every game. We consider ourselves lucky when we get him out." - Charlie Grimm, Cubs Manager, 1947