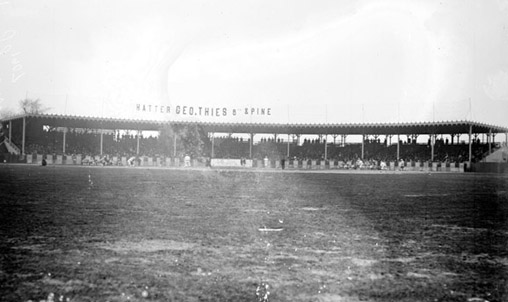 Sportsman's Park was originally built for the St. Louis Browns when the American League's Milwaukee Brewers relocated to St. Louis, MO following the 1901 season. In 1909, the park was rebuilt on the same site, but with a different orientation and dimensions, and a double-deck grandstand behind home plate. It was gradually improved over the years, with concrete bleachers added in 1925-1926.

The St. Louis Cardinals moved in as joint tenants on July 1, 1920, abandoning Robison Field, and remained there as sole occupant after the Browns left for Baltimore, MD following the 1953 season. The entire 1944 World Series, pitting the Browns and Cardinals, was played here. The Cardinals played their last game here on May 8, 1966, when they moved to Busch Stadium. To complicate matters, Sportsman's Park was officially called Busch Stadium from 1954 to 1966. Home plate was moved by helicopter from one Busch Stadium to the other after the last game played here, to indicate continuity with the Cardinals' history of success in the park. The stadium was demolished shortly thereafter and the site now serves the Herbert Hoover Boys' Club, with a baseball field still in the same spot.

Sportsman's Park had very cozy dimensions particularly favorable to left-handed power hitters, as the power alley was only 348 feet away in right field, with a cement fence of 11.5 feet. In 1929, the heavy-hitting Detroit Tigers hit eight home runs to right field in four games, prompting Browns' president Phillip Ball to erect a 21.5-foot screen in front of the right field pavilion just before a visit by the New York Yankees, meaning that a ball had to clear a 33-foot barrier to be a home run to right. The temporary screen became a permanent feature, except for the 1955 season, when GM Frank Lane of the Cardinals ordered it to be taken down, as the Cardinals had a number of lefty power hitters in their line-up that season; when it became evident that the move helped the opposition more than the Cards, the screen was reinstalled the following season and stayed there until the park's demolition. A legend developed that in 1932, when slugger Jimmie Foxx was chasing Babe Ruth's record of 60 home runs in a season, he was thwarted by the screen, which cost him anywhere from 3 to 12 home runs (he finished the season with 58); in fact, researcher Robert H. Schaefer went through game accounts for that season and concluded that, at most, Foxx hit one ball into the screen that would have been a home run prior to 1929.