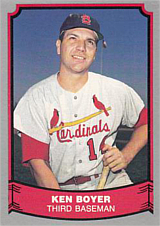 "Ken Boyer might have been the best third baseman I’d seen or played with." - Bill White

"At third base, I saw the best ballplayer on first impression that I have seen in many a day, Boyer by name." - Branch Rickey, scouting the young Ken Boyer [1]

Ken Boyer, the 1964 National League MVP, played 15 seasons in the big leagues as a third baseman. He won five Gold Gloves and was the top third baseman in the league, and possibly all of baseball, in the late 1950s and early 1960s. He was named to seven All-Star teams, in 1956 and from 1959 to 1964, while hitting over 20 home runs eight times and batting over .300 five times. On his retirement, he was one of only two third basemen with 250 career home runs (along with contemporary Eddie Mathews) and his .462 slugging percentage was the top mark for a third baseman in history.

His Gray Ink total of 138 is close to an average Hall of Famer at 144. In Hall of Fame voting by the BBWAA, Ken got as high as 25% in 1988, one vote higher than Ron Santo had that year. In the 2005 Veterans Committee voting, Boyer received 19%, and was 11th in the voting, behind Roger Maris and Marty Marion. He is, however, an inaugural member of the St. Louis Cardinals Hall of Fame (Class of 2014) and had his number 14 retired posthumously in 1984.

Only one of his ten most similar players, according to similarity scores, is in the Hall of Fame: the aforementioned Ron Santo, who was voted posthumously in by the Veterans Committee. The most similar player, according to the methodology, is Bobby Bonilla. However, Bobby Bo played at a time when averages were higher, and he never won either an MVP award nor a Gold Glove. Other players on the list include Robin Ventura, Ron Cey and Reggie Smith. Boyer is unfairly hurt by the similarity scores method because he played during the second dead-ball era when averages were lower - as a result, the most similar player probably should be Santo, who also played during the same era. Santo broke in in 1960, while Boyer started in 1955. Their careers also ended five years apart, as Santo finished in 1974 while Boyer finished in 1969. Boyer won his Gold Gloves in 1958-1961 and 1963, while Santo won his in 1964-1968. Interestingly, while Ron Santo is only 10th on the list of most similar players to Boyer, Boyer is #4 on the list of most similar players to Santo.

Ken was the brother of major leaguers Clete and Cloyd, minor leaguers Wayne, Lynn, Len and Ron, the father of Dave and the uncle of Mickey Boyer. Ken spent two seasons as a St. Louis Cardinals coach in 1971 and 1972 and two and a half as their manager, from 1978 to 1980, finishing as high as third in 1979. His players included Ted Simmons, Keith Hernandez, and former teammate Lou Brock.

While in the minors, Boyer missed the 1952 and 1953 seasons due to military service at the time of the Korean War. Ken died at 51 from cancer.