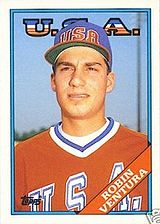 Robin Ventura was arguably the best third baseman of the 1990s, known for his excellent fielding, grand slam home runs, and clubhouse leadership. Despite hitting a mere 294 career home runs, 18 of them were grand slams.

Robin attended college at Oklahoma State University, where he put together a 58-game hitting streak and is widely considered one of college baseball's all-time greats. In the 1987 Intercontinental Cup, Robin hit .364/~.417/.523 for the Silver Medal-winning USA. While the team's 2nd-best contact hitter after Mickey Morandini, his power numbers (1 HR, 11 RBI) were far less than the All-Star 3B for the event, Omar Linares (11 HR, 26 RBI). In 1988 he played on the Olympic baseball team and also won the Golden Spikes Award as the nation's best amateur player. Ventura also starred during the 1988 Baseball World Cup, hitting .434/.508/.736 with 15 runs, 8 doubles and 32 RBI. He drove in a tourney-high 7 in one game against Spain. He led in doubles, tied Antonio Pacheco for the most hits, just missed the top five in average and was 11 RBI ahead of the closest competitors, Tino Martinez and Luis Casanova (he shattered the record of 21, held Juan Izaguirre (1950), Armando Capiro (1972) and Agustin Marquetti (1973)). He was named the All-Star third baseman for the tournament, ahead of Omar Linares.

In 1997, he suffered a gruesome broken leg during spring training, but came back late in the season. The following season, 1998, he rebounded with 21 home runs and another Gold Glove.

After the 1998 season, he was granted free agency and signed with the New York Mets. He had his best season in 1999, hitting .301 with 32 home runs and 120 runs batted in. That year he also won his sixth Gold Glove, becoming, at the time, only the second third baseman to win a gold gloves in both the American and National Leagues, after Matt Williams. That season he finished sixth in National League MVP voting. In that year's National League Championship Series, he provided additional heroics in Game 5: with the game tied 3-3 in the 15th inning, Robin hit a Grand Slam Single to win the game.

In 2000, he provided strong clubhouse leadership during the Mets' unlikely run to the World Series. Following the 2001 season, he was traded across town to the New York Yankees for David Justice. While a Yankee, he made the All-Star team again in 2002. In July 2003, he was traded to the Los Angeles Dodgers. He played sparingly over the next season and a half and retired after the 2004 season.

During his career, Ventura was particularly proficient at hitting grand slam home runs. He homered with the bases loaded a total of 18 times and is tied for fourth on the all-time grand slam list (Lou Gehrig is first with 23).[1] On September 4, 1995, he hit two against the Texas Rangers, and he became the only major leaguer ever to hit grand slams in both games of a doubleheader when he hit two against the Milwaukee Brewers on May 20, 1999. For his career, Ventura hit .340 with the bases loaded.

In 1993, he became a laughingstock after charging the mound to take on 46-year-old legend Nolan Ryan. Ryan quickly put Ventura in a headlock and pummeled him in the head.

The most similar player to Ventura by far, according to the similarity scores method, is Ron Cey.

In 2005, Robin Ventura returned to the Chicago White Sox as a television broadcaster for a handful of games.

After years away from professional baseball, Ventura started easing back into the sport when the White Sox hired him on June 6, 2011 as a special advisor to Director of Player Development Buddy Bell. Everyone was surprised when he was named manager of the White Sox for the 2012 season on October 6, 2011. Ventura had no previous coaching or managing experience before being hired. The team did well during his first season at the helm, finishing second in the AL Central with a record of 85-77, but the following years were tougher. The Sox finished last in 2013, followed by three consecutive fourth-place finishes from 2014 to 2016. That last season was particularly disappointing because the team had got off to a very solid start, leading the division until mid-May, but then collapsed badly. The season was marred by a spring training dispute with veteran 1B Adam LaRoche which led to his announcing he was retiring early, and a mid-season spat with ace starter Chris Sale over the wearing of retro uniforms. The team stated that they were ready to retain Ventura as manager after the season if he wished to return, but on the final day of the season, October 2nd, he announced that he was resigning. Former Chicago Cubs manager Rick Renteria replaced him.