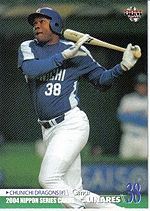 After German Mesa was banned from Cuban play for a period, Linares moved to shortstop for the 1997 Intercontinental Cup and fielded .920. He batted .367/.444/.673 with 9 RBI and made the All-Tournament team at short. Cuba failed to win Gold in a senior-level event for the first time since Linares had joined the team as Koji Uehara and Japan shut them down in the finals; Linares did connect for one homer in the 11-2 loss. When Cuba beat the Baltimore Orioles in game two of the 1999 Baltimore Orioles-Cuban National Team Exhibition Series, Linares reached base six times and had four hits. In game one, he had one of two Cuban RBI in a 3-2 loss.

In the 2001 Baseball World Cup, Linares hit .320/.346/.560. In 2002 the Cuban government let several players, most prominently Linares, play in Japan. Linares went to the Chunichi Dragons and struggled, hitting just .174/.255/.239 in 16 games, striking out 19 times in 46 at-bats. Injuries and age may have limited his effectiveness, but this is not what would be expected from a 36-year-old player who people claim should be in the Hall of Fame. Linares hit .229/.311/.417 in 2003 for the Dragons and spent part of the year in the minors. Moved to first base, he slightly outperformed Chunichi's other gaijin bust there, Ivan Cruz. In 2004 Linares split time with Hiroyuki Watanabe at first and had his best year in Nippon Pro Baseball, hitting .283/.363/.403. Overall Linares batted an unimpressive .246/.327/.387 in parts of three seasons with the Dragons and never was able to win a regular starting role. Ten years later, another Cuban (Frederich Cepeda) would follow his path to Japan.