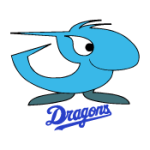 Based in Nagoya, Aichi, the Chunichi Dragons began play in 1936 as the third team in the Japan Baseball League. The team has used its present name since 1954 after having previously employed it from 1948-1950, during the interim the team was named the Nagoya Dragons. The team had previously played as Chubu Nihon. They nearly won their second Japan Series in 2004, but fell to the Seibu Lions in seven games after leading 3 games to 2.

The Dragons have been known for some unorthodox managers - hiring American Wally Yonamine as the first foreigner to head a team, and more recently bringing aboard Hiromitsu Ochiai, who did not believe in Japan's traditional intensive practices. Both moves were successful, as Yonamine took the team to their first Japan Series in 20 years in 1974, and Ochiai took them to their closest chance at a Japan Series victory since 1954 in his rookie season as a manager, and to a Japan Series championship in 2007.

Playing in a large park, the team has generally posted impressive pitching stats in recent seasons; home run outputs have been low but their top batters have still put up good batting averages and doubles totals.