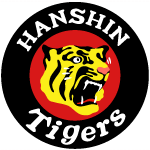 Founded in December 1935, the Hanshin Tigers participated in the first season of Japanese pro baseball and have remained in the league since. Oringinally based in Osaka, they now play in Hyogo. The team's fans, the Torakichi, have one of the most-dedicated sets of fans in Japan.

The Tigers won the 1936 spring championship, making them the first pennant-winners in Japanese pro baseball history. They won 4 of the next 12 titles but struggled after 1947. In 1950, Nippon Pro Baseball went to a 2-league arrangement. Since then, Hanshin has only made 5 trips to the Japan Series - in 1962, 1964, 1985, 2003, and 2005 winning the Series for the first and only time in '85. The ace of the 1964 team was American Gene Bacque, who went 29-9 to become the only foreign player to ever win the Sawamura Award. In 1985, the team was again led by a foreigner, 1B Randy Bass, who won a Triple Crown and was MVP of the Japan Series. The excitement of the first title in 21 years led the Hanshin fans to throw a statue of Colonel Sanders into the river, presumably under the idea that the statue resembled Bass, which it clearly did not. Since then the team has suffered the victim of the Curse of Colonel Sanders.

In 2003, Hanshin finally found their way back to the Japan Series behind the play of MVP Kei Igawa, batting champ Makoto Imaoka, SB leader Norihiro Akahoshi, sluggers George Arias and Tomoaki Kanemoto, closer Jeff Williams and good starting pitchers (Trey Moore, a resurgent Hideki Irabu and Tsuyoshi Shimoyanagi). Hanshin lost the first two games of the Japan Series but won the next two on a sacrifice fly and a homer in the bottom of the 10th. They dropped games 6 and 7, though, costing them the title.

Two years later Hanshin returned to the Japan Series, but they were swept by the Chiba Lotte Marines, who outscored them 30-2 in the first three games before a close 3-2 finale for a 33-4 differential in the total series. 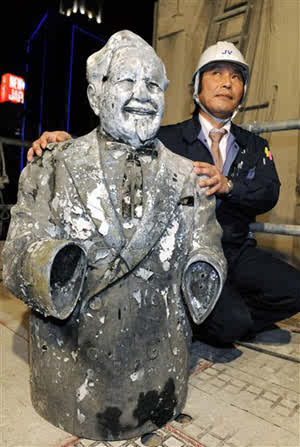 Statue of Col Sanders found in the mud

The famous bust of Colonel Sanders was found in the mud of the Dotonbori, a river of the city of Osaka in March 2008 during a construction project. The rest of the statue was later found (the statue having broken into two sections). Fans of the Tigers hope the curse will finally be lifted. [1] [2]