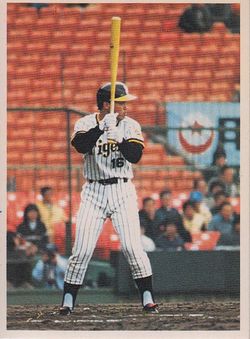 Akinobu Okada was a collegiate star, winning a Triple Crown in the Tokyo Big Six University League in 1978. The third baseman hit .379, the highest mark in the league's history, and his 20 homers are third all-time as of 2006. He was the first-round draft pick of the Hanshin Tigers. The Tigers, managed by Don Blasingame, had a star third baseman in Masayuki Kakefu and had signed free agent 2B Dave Hilton. Blasingame had planned to move Okada from third to second and make him a regular, but wanted to give the rookie time to learn the new position and to develop. An American manager would likely be skeptical as well of rushing a prospect straight into a starting role for the club. Japanese fans and the media became enraged that Okada was sitting, especially as Hilton was hitting very poorly. The conflict led to both Hilton and Blasingame losing their jobs. Throughout the situation, both Hilton and Okada had gone about their work and tried not to become involved in a personality struggle or questions about racism. While they did not feed into the problem, it may have led to more pressure on Blasingame that they were silent.

When Kakefu was injured, Okada was held out due to the media pressure of playing the Yomiuri Giants. When he finally was put in at third and later given the regular job at second, it was too late to save Blasingame's job. Okada hit .290/.336/.484 with 18 homers in 108 games, made the All-Star team and was named the Central League Rookie of the Year. He was the first rookie to homer in his debut in the All-Star game. He was the youngest player to hit a pinch-hit home run in a NPB All-Star Game until Tomoya Mori in 2015. In 1981 Akinobu hit .289/.331/.472 with 20 homers, then .300/.362/.442 the next year, making the All-Star squad both times.

After retiring, Okada coached for Orix and Hanshin, then managed Hanshin's minor league team. In 2004 Okada took over the helm for the Tigers, who had made the Japan Series the prior year for the first since Okada's big year in 1985. Manager Senichi Hoshino had retired and Okada had been the defense and baserunning coach. In his first season as manager the team was a major disappointment, going just 66-70-2 and finishing in the second division. They bounced back nicely in 2005, winning the pennant with an 87-54-5 record, though they were swept in the 2005 Japan Series by the Chiba Lotte Marines.

Sources: "You Gotta Have Wa" by Robert Whiting, japanbaseballdaily.com by Gary Garland