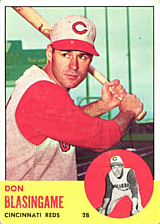 "Don, who does not have the natural ability of some of the league's other infielders, made himself a good player through sheer determination. He can run, he has a good arm, and he makes all the plays required of a second baseman." - Sport magazine, September 1957

Second baseman Don Blasingame played in the majors for five clubs over twelve seasons. He served in the military for two years (1951-1952) during the Korean War then signed with the St. Louis Cardinals before 1953. In 1958, as a member of the Cardinals, he made the All-Star team while batting .274 with 73 runs scored. He enjoyed his finest full season with the stick the following year, batting .289/.361/.359 with 90 runs scored and a career high 178 hits. He was dealt to San Francisco that off-season for Daryl Spencer and "Daddy Wags" Leon Wagner, with his glove work keeping him around until 1966 with a host of teams, including the National League champion Cincinnati Reds in 1961.

After his major league career ended, he played in Japan with the Nankai Hawks from 1967 to 1969. He joined the Hawks coaching staff, as he was a favorite of Hawks player-manager Katsuya Nomura, and ended up becoming a shadow manager for Nomura calling most of the plays during his time there. He became a coach for the Hiroshima Carp in 1978 and managed the Hanshin Tigers in 1979 and 1980. He returned to the Nankai Hawks to manage from 1981 to 1982.

On April 13, 2005, Blasingame died at his Arizona home of heart failure. He was 73. He was the son-in-law of catcher Walker Cooper. His son, Kent, played in the minors then scouted in both the US and Japan.