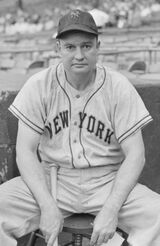 "The tough reputation of the Cardinals was built on our catcher Walker Cooper saying 'Knock him down. I'll get him before you get him.' That was our reputation. I'll never forget the time Mickey Owen was catching for the Dodgers and Walker stepped on the Dodgers' first baseman and Mickey was coming down the first base line, backing up. Well, after Cooper stepped on the first baseman, Mickey ran and jumped on top of Cooper's back and and gave him a bear hug and Cooper flipped him off real quick, and when Mickey came through the dugout the next day, he said 'I won't do that again.'" - Marty Marion, to Peter Golenbock, The Spirit of St. Louis 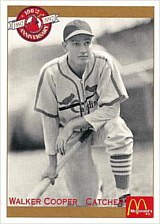 Eight time All-Star Walker Cooper was one of baseball's top catchers of the 1940s. He began his big league career with the St. Louis Cardinals, hitting .300 in three World Series from 1942 to 1944. His brother, Mort, was a top pitcher in the early 1940s, dealing to Walker for several years.

Just like Mort in 1933, Walker entered the Cardinals farm system in 1935, debuting in the bigs two seasons after Mort by hitting .316 in a six-game look in 1940. He was limited by a broken collarbone in 1941, batting only .245 in 61 games, then exploded with an All-Star season in 1942, batting .281 with 32 doubles in 125 games. Walker had a big World Series while Mort struggled; he drove in the game-winning run in Game 4 and scored the game winner in the deciding Game 5, picking off future Hall of Famer Joe Gordon in the 9th inning as the Cardinals brought home a title against the New York Yankees. In 1943, he hit a career high .318 with 30 doubles and 81 RBI, returning to the All-Star Game while finishing runner-up to teammate Stan Musial in the MVP vote. He hit .294 as the Cards lost a rematch with the Yanks in the Fall Classic. He once again shone in 1944, batting .317 with 13 home runs and 72 RBI as the Cards marched to a third World Series in a row, beating in city rivals the St. Louis Browns in six games. In 16 postseason games, none after 1944, Walker hit .300 with 6 RBI.

Before the 1945 season, Walker and Mort banded together to ask for a modest salary increase from owner Sam Breadon to $15,000 each. They would later cave, with Walker only playing 4 games before entering the Navy. For having the temerity to stand up for what he felt was a fair pay increase (having played in each of the last three All-Star Games), the New York Giants were allowed to buy his contract for the princely sum of $175,000 while he was serving. The figure marked the highest cash deal of the time, rather hilarious and sad considering all it would have taken to keep Walker happy and in house was a simple raise. Upon his discharge in April 1946, he started slow by hitting .268 in 87 games. Then he broke out with his best big league season by far in 1947, hitting .305/.339/.586 with 35 home runs and 122 RBI, establishing several career highs. He homered in six straight games, beginning with a two-home run game against the Cardinals on June 22nd, to tie a team record established by Highpockets Kelly in 1924. Even with his offensive explosion, once Leo Durocher took over for Mel Ott in the middle of the 1948 season, Walker was a dead man walking in Gotham. Durocher was a man who built teams his way, routinely with speed, speed, and more speed, and Walker did not fit the mold.

In June 1949, Walker was pushed to the Cincinnati Reds for Ray Mueller. On July 7th, he set the Reds record for most productive game at the plate. Against the Chicago Cubs, he had six hits: three homers, two doubles, and a single (15 total bases and 10 RBI). He was the only major league player to collect 6 hits and 10 RBI in a game until joined by Anthony Rendon on April 30, 2017. His RBI total remains the single-game record for a catcher. No other Reds player would collect 6 hits in a game until Phil Ervin on July 13, 2019. He made his final All-Star appearance in 1950, having moved to the Boston Braves in a deal for Connie Ryan on May 10th. He batted .329 with the Bostonians the rest of the way, then hit .313 in 109 games in 1951. After falling to a .235 average in 102 games in 1952, Walker began a nomadic existence, following the Braves to Milwaukee before finishing his career with part-time looks with the Pittsburgh Pirates and the Chicago Cubs and bringing it home as a player-coach with the Cardinals in 1957. That season, teammate and second baseman Don Blasingame married Walker's daughter, Sara, marking one of the few times a father and son-in-law were on the same roster.

In eighteen seasons, Walker batted .285/.332/.464 with 173 home runs and 812 RBI, a really good batting line for a catcher. His longevity and hitting/catching statistics parallel those of Hall of Famer Ted Simmons. Per similarity scores, his career actually matches up better with recent catcher Ramon Hernandez as well as contemporary Smoky Burgess.

Walker did some minor league managing after playing, helming the Indianapolis Indians (1958 and 1959) and Dallas-Fort Worth Rangers (1961). He was also a member of the Kansas City Athletics coaching staff in 1960. He died in Scottsdale, AZ at 76. In addition to his brother and son-in-law, he was the grandfather of Kent Blasingame.