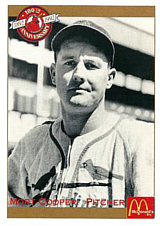 "Mort was a great pitcher. He pitched with sore arms. When he was with the Cards, after the game his arm would swell up and Doc Weaver, the trainer, would hang it up by a strap and he'd milk his arm, milk it in ice. Mort had pitched for us in Boston and we were going into Brooklyn and Brooklyn had to beat us to win the pennant. And Southworth didn't know who he was going to pitch. I asked Mort, 'Couldn't you pitch?' He had just pitched two days before. Mort said, 'Hell yes, I have no place to go. I can pitch.' He really wanted to beat Leo and the Dodgers. I caught Billy going out on the subway and I rode with him and I said, 'Why don't you pitch Mort?' 'Oh no, he can't pitch. He just pitched two days ago.' I said, 'He won't have to pitch anymore after that. And he'd like to pitch. I know he'd like to pitch. He told me he wants to pitch the game. Why don't you just pitch him as long as you can?' So Mort pitched and won the ball game and the Cardinals tied for the pennant." - Danny Litwhiler, on the home stretch of the 1946 season for the Boston Braves, to Peter Golenbock, The Spirit of St. Louis

Pitcher Mort Cooper was the 1942 National League Most Valuable Player with the St. Louis Cardinals. He won 128 games in eleven seasons, primarily spent with the Cardinals, making four All-Star teams and winning two World Series rings. His younger brother, Walker Cooper, was a fellow All-Star and catcher; the two formed a battery for several seasons.

Born in Atherton, MO, Mort was a product of Branch Rickey's minor league system in St. Louis, reaching the majors in 1938 after seven stops on the farm. He made three starts and four appearances in his trial run, tossing a complete game three-hit win in his debut against the Philadelphia Phillies on September 14th, while also picking up a save in 23 2/3 innings of work. Mort began the 1939 season as a swingman before easing on into the rotation after the All-Star break, winning eight of eleven decisions down the home stretch to finish 12-6 with a 3.25 ERA and 130 strikeouts in 210 2/3 innings. He was inconsistent for much of 1940 before again coming alive later in the season, spinning two shutouts (including his final start against the Chicago Cubs on September 29th) to finish at 11-12, 3.63. He battled elbow problems in 1941 to log a third straight double-digit victory season, ending the year at 13-9, 3.91 in 29 games.

There was concern among Cardinals brass about Mort and his right arm entering 1942. The concerns evaporated when, much like Peter Frampton three decades later, Mort came alive when the opening bell rung. In his second start of the season, he shut out the Cincinnati Reds on three hits, then pitched five complete games with three victories in May. In June, Mort merely went 7-0 in seven starts, tossing six complete games, four shutouts and posting an ERA of 0.72 ERA. He was the National League's starter at the All-Star Game in the Polo Grounds, a rare misfire in which he allowed all three of the AL's runs in three innings to eat a 3-1 loss, dealing much of the game to his brother, Walker, also a first-time All-Star (and starter). With the Cards in a dogfight with the Brooklyn Dodgers, Mort did some of his best work against the "Bums", going 5-1 with three shutouts against them en route to his finest season as a big leaguer. Mort finished the season 22-7 with a 1.78 ERA, leading the league in wins, ERA and shutouts (a whopping 10) while fanning a career best 152 in (another career best) 278 2/3 innings. Though he was not sharp in the World Series (0-1, 5.54 in two starts), the Cardinals turned back the mighty New York Yankees. At season's end, Mort was crowned National League MVP.

Mort dominated the senior circuit again in 1943, just not quite as thoroughly as one year prior. He came home at 21-8, 2.30, leading the league again in victories while spinning 6 shutouts and striking out 141 in 274 innings. He fared better in two World Series starts in a rematch with the Yankees, going 1-1, 2.81 in picking up the Cards' lone victory in the series. He had one more absolutely terrific season in 1944, once again winning 22 games in a 22-7, 2.46 season where he enjoyed his final league lead in shutouts (7) and his final year of 200-plus innings (252 1/3 innings). Facing the St. Louis Browns in their only World Series, Mort was filthy. Despite a 1-1 record, he crafted a 1.12 ERA, shutting out the Brownies in Game 5 with 12 strikeouts; the Cards took the series in the next game.

Before the 1945 season, the brothers Cooper waged a holdout against owner Sam Breadon, asking simply that their salaries be raised to $15,000 each. Though they later gave in and returned, the holdout was the beginning of the end of Mort's St. Louis days and his high salad days on the mound. In May, Mort was banished to the Boston Braves for Red Barrett and $60,000. His elbow miseries returned and he only pitched 24 times between the two clubs to a 9-4, 2.92 record, undergoing another surgery in August. He had his final double-digit victory season in 1946, going 13-11, 3.12 in 28 games. On September 29th, he shut out Brooklyn on four hits to force a one-game playoff between the Dodgers and his old mates, the Cardinals, for the pennant. He split 1947 between the Braves and New York Giants. His arm had now forsaken him and he finished the year at 3-10, 5.40 in 18 games. After a third elbow operation, he returned for just one game with the Chicago Cubs on May 7, 1949. Mort failed to record an out while allowing a three-run homer to Duke Snider of the Dodgers at Ebbets Field.

Mort's post baseball life was brief. He developed cirrhosis of the liver from a lifetime of drinking and held a variety of jobs. He died at 45 in Little Rock, AR, having been hospitalized for a multitude of ailments. In 2019, he was posthumously inducted into the St. Louis Cardinals Hall of Fame.