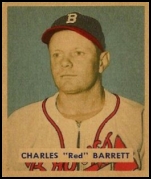 On August 10, 1944, Red Barrett beat the Cincinnati Reds 2-0. He gave up just two hits and threw just 58 pitches, a record for fewest pitches in a complete game. The game lasted one hour and 15 minutes. The game also holds the record for the shortest night game in major league history. Although Barrett is generally remembered solely for that one game, he also led the National League in victories in 1945 with 23, and he appeared in the 1948 World Series.

Barrett was born in Santa Barbara, CA, in 1915. From 1937-1940, he had brief appearances with the Cincinnati Reds, pitching a total of 44 innings, and going 3-0. His ERA's were good in the first three of the four seasons.

In 1943, at age 28, he became a regular in wartime. He pitched for a couple of seasons with the Boston Braves, who had players such as Eddie Joost and Tommy Holmes. His record-setting game was in 1944.

In May of 1945, he was traded to the St. Louis Cardinals. He had earned only 2 victories with the Braves, but he added 21 with the Cardinals, leading the league in total victories. It was a performance much like the one of Rick Sutcliffe in 1984 when he came over from the Cleveland Indians to the Chicago Cubs and won the 1984 National League Cy Young Award. There was no such award in existence in 1945, but Barrett was named to the All-Star team, and was 3rd in the MVP voting.

The following year, he was on the cover of Life Magazine on April 1, 1946. He also had an endorsement deal for a baseball glove. He appeared in only 23 games (9 as a starter), and went 3-2. The Cardinals won the World Series, but Barrett did not pitch in the post-season. After the 1946 season, the Braves bought him back, and he finished his career with them. In 1947, he was 11-12.

Lifetime, he pitched 11 years in the big leagues, with an ERA of 3.53. He had a record of 69-69. A visit to Dick's Hot Dog Stand in Wilson, NC will find numerous photos from his baseball career. In 2009 he was elected to the International League Hall of Fame.