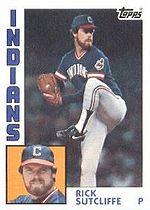 Rick Sutcliffe towered over batters in more ways than one, since he was 6 ft. 7 inches tall. He was a first-round draft pick by the Los Angeles Dodgers at age 18 in 1974. By 1976, he had pitched his first game in the big leagues (5 innings, without giving up a run).

The Dodgers of the time were a top team, having gone to the World Series in 1974, winning 92 games in 1976, and going to the Series again in 1977 and 1978. 1976 was the year in which Tommy Lasorda took over the managerial duties from Walter Alston. In spite of Sutcliffe's successful first game in the majors, he didn't pitch for the Dodgers in 1977, and in 1978 appeared in only 2 games (again giving up no runs).

1979 marked his emergence as a regular starting pitcher, and he was named Rookie of the Year, winning 17 games and losing 10. The team, however, fell below .500 for the season.

1980 and 1981 were tough years for Sutcliffe, as he lost his role as a regular starter, and his ERA's plummeted. He and Lasorda did not get along. He did not appear in the 1981 World Series which the Dodgers won. Prior to the 1982 season he was traded to the Cleveland Indians.

1984 started poorly, as he went 4-5 with an ERA of 5.15 during the first few weeks of the season. Then, magic happened. Cleveland traded him and other players to the Chicago Cubs in return for Joe Carter, Mel Hall, and some others. Sutcliffe began an almost perfect stretch with the Cubs, going 16-1 with an ERA of 2.69 in an extreme hitter's park. The Cubs won their first division championship, and Sutcliffe won the Cy Young Award. Sutcliffe became a fixture on the Cubs scene, pitching for them through 1991, although he was never to have another year like 1984. He did, however, win 18 games in 1987 (leading the National League in victories and finishing 2nd in the Cy Young Award voting), and in 1989 he won 16 and the Cubs again won the division. By 1989 his salary was one of the three highest in baseball.

Sutcliffe became a free agent in 1992, and spent two years with the Baltimore Orioles, winning 26 games total although his ERA was below the league average. He finished up his playing career with the St. Louis Cardinals in 1994.

Although not a strong candidate for the Hall of Fame, his credentials are consistent with the public's perception during his career that he was a major star. He won 171 lifetime games with a winning percentage over .550. He pitched nearly 3,000 innings, and while his ERA appeared mediocre, much of his career was spent in Wrigley Field, a hitter's park. He was a major factor in the league during many years of his career: in addition to his Cy Young year (1984), he was 2nd once in the Cy Young voting (1987), 5th another time (1982), and in yet another year was Rookie of the Year (1979). In still another year (1983) he was named to the All-Star team, and in yet another year (1992) he led the league in games started and was in the top ten in wins. He was the youngest player in the league in 1976 and one of the oldest in 1994. He also twice won the Comeback Player of the Year award, once in each league.

The similarity scores method shows the most similar player as Dave Stewart, another major star who came up in the Dodger system at the same time as Sutcliffe.

Sutcliffe is credited with stealing home plate once, but it was really a botched pick-off attempt of another baserunner. He holds the record for the most times facing Barry Bonds without giving up a home run. Bonds had 51 plate appearances against Sutcliffe and batted .239/.280/.326; those came before Bonds's big home run years, though.