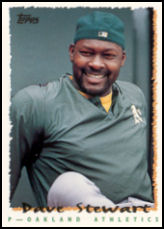 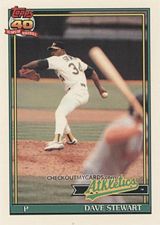 Dave Stewart's big-league career lasted 15 seasons, but he is best known for a four-year stretch with the Oakland Athletics from 1987 to 1990 in which he notched 84 wins - all 20-victory seasons - and led the Athletics to three consecutive World Series appearances. In 1989, "Smoke" won 21 games, two more in the American League Championship Series and two more in the World Series, winning the Series MVP award as the A's captured their fourth Series championship in Oakland. Stewart left the A's after the 1992 season for the Toronto Blue Jays. At age 36, Stewart was no longer a dominant pitcher, but still won a dozen games for the Jays in 1993 as they went on to win the 1993 Fall Classic.

Stewart was drafted in 1975 by the Los Angeles Dodgers as a catcher, but was converted to the mound during his minor league days. He made his big-league debut at age 21 in 1978, pitching two scoreless innings of relief against the San Diego Padres at the end of the season. Two years later, Stewart was back, and spent much of the next three seasons pitching both out of the bullpen and out of the rotation for the Dodgers.

On August 19, 1983, the Dodgers traded Stewart to the Texas Rangers for Rick Honeycutt. Upon Stewart's arrival in Arlington, Rangers manager Doug Rader inserted him into the starting rotation. He fared well, winning five of seven decisions, but struggled to a 7-14 mark in 1984. Banished to the bullpen in 1985, his struggles became worse. In September, he was sent to the Philadelphia Phillies, where he made four appearances. He underwent surgery during the off-season to remove bone chips from his elbow. He made eight more appearances for Philly in 1986, did poorly, and was released. The Athletics signed him, and he spent the rest of that season working between the rotation and the bullpen. In 1987, he took a spot in the Oakland rotation and ran with it, winning 20 games and becoming the first Oakland hurler to fan 200 hitters in a season since Vida Blue in 1971.

Stewart was the pitching coach for the San Diego Padres in 1998, and then was assistant General Manager of the Toronto Blue Jays in 2000 and 2001. He resigned when he was bypassed for the top job in favor of J.P. Ricciardi and returned as a pitching coach with the Milwaukee Brewers in 2002. He resigned from that position to become a sports agent. At the end of the 2014 season, rumors emerged that he would be hired by the Arizona Diamondbacks to succeed Kevin Towers as General Manager. Tony LaRussa, Stewart's former manager in Oakland, was now the D-Backs' President. The rumors were confirmed on September 25th, when the D-Backs officially introduced Stewart as their new GM, also giving him the title of Senior Vice-President. However, his tenure was short and controversial, with two major moves at its center. The first was the decision to sign P Zack Greinke to an extremely rich multi-year contract, and the second, the trade of top prospects, including overall #1 draft pick Dansby Swanson and OF Ender Inciarte to the Atlanta Braves in return for P Shelby Miller. Greinke had a mediocre 2016 season, but Miller was absolutely awful, and combined with an injury to CF A.J. Pollock, the D-Backs had a terrible season. Both manager Chip Hale and Stewart paid the price, being fired at the end of the season, with Mike Hazen taking over as GM. Ironically, the D-Backs made it to the postseason the next year, with Greinke making a major contribution.

In 2017, Stewart's name popped up in the news again, this time as a member of a group bidding to buy the Miami Marlins. The group was led by Tagg Romney, son of former presidential candidate Mitt Romney, and also included Hall of Famer Tom Glavine; its rival was led by another presidential scion, former Florida governor Jeb Bush, and had Derek Jeter as its main baseball figure. In the end, it was a group financed by Bruce Sherman and including Jeter that won the bidding. Stewart attended spring training with the Athletics in 2018 as a special instructor. In 2019, the Athletics announced that they would retire his uniform number, 34, during the following season. The number had already been retired by the A's, in honor of Hall of Famer Rollie Fingers, but this had been done after Stewart had also worn it during his years with the Green and Gold.