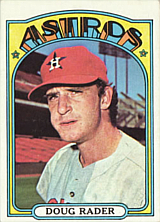 Doug Rader was a third baseman for 11 seasons who was both a solid fielder who won the Gold Glove five times and also had better than average power, topping 20 home runs on three occasions, and hitting 155 long balls overall. Never a high average hitter - his career batting average was .251 - he spent his first 9 seasons, from 1967 to 1975, with the Houston Astros, then was traded to the San Diego Padres in return for pitchers Joe McIntosh and Larry Hardy.

Rader hit .257 but with only 9 homers with the Padres in 1976, then after 50-some games in 1977, was sold to the expansion Toronto Blue Jays. His power came back with the Jays, as he banged out 13 homers in 96 games and drove in 40 runs in the second half of the 1977 season, but he was released in spring training of 1978 as the Jays got rid of some of the older players who had done well for them in their inaugural season but who did not figure in their future plans. Rader retired and became a minor league manager with the Hawaii Islanders of the Pacific Coast League in 1980. After three years, he was hired by the Texas Rangers to be their manager starting in 1983.

Many observers, most prominent among them Bill James, thought Rader had every quality required to become a great major league manager. In reality, he did all right, but never managed to steer a team into a pennant race. He did get another shot to lead a team after the Rangers fired him early in the 1985 season, with the California Angels from 1989 to 1991, but again could not take the team over the hump. He was also interim manager of the Chicago White Sox for two games after Tony LaRussa was dismissed in 1986.