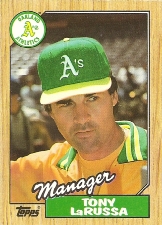 Tony LaRussa is one of the winningest managers in the history of baseball. His major league career as a player is not much remembered. He broke into the majors at the age of 18, and appeared in six major league seasons over the space of 10 years, hitting .199 lifetime.

LaRussa grew up in Tampa, FL, near where Al Lopez lived. He was friends with Lou Piniella. He was in the Colt League World Series as a teenager. Toward the end of his major league playing career, he became impressed with Dick Williams' approach to managing. He became a player-coach for a number of years in the minors, and then a minor league manager at Knoxville in 1978 before being promoted to a coaching position on the major league White Sox squad shortly after Larry Doby was named the team's manager. Source: From a 2006 article in Coach and Athletic Director.

LaRussa then managed the Iowa Oaks in 1979 until August 2nd, when he got his first opportunity to manage in the majors, taking over for player-manager Don Kessinger at the helm of the Chicago White Sox.

LaRussa managed in the big leagues every year from 1979 to 2011. In June 1986, he was fired by the White Sox when their GM was Hawk Harrelson, but he was named manager of the Oakland Athletics the following month. He was hired by the Cardinals before the 1996 season. In his sixteen years with the Cardinals, they were in the playoffs nine times, and won the National League pennant in 2004, 2006 and 2011, being World Series champions in 2006 and again in 2011.

On August 25, 2004, LaRussa won his 2195th game and passed Sparky Anderson to move into third place on the all-time wins list behind Connie Mack and John McGraw. LaRussa moved into third-place all-time in major league games managed on August 20, 2007, passing Bucky Harris. Heading into 2007, his teams had been MLB's winningest team in the regular season six different times, and he had only had seven losing seasons in his 26 complete seasons as skipper.

On March 22, 2007, Tony was arrested for drunk driving in Jupiter, FL, when he was found asleep at the wheel of his SUV at a stop light. LaRussa had his foot on the brake and the vehicle was in drive. His blood alcohol content was 0.093 percent. LaRussa apologized and said he took full responsibility.

In 2009, LaRussa became the third manager to reach 2,500 wins in the majors, behind Mack and McGraw. In 2011, he became the majors leagues' dean of managers, following the retirement of Bobby Cox and Joe Torre, neither of whom had managed continuously since starting out a year before LaRussa, in 1978. In May of that year, he missed a few games because of shingles, a skin ailment. Coach Joe Pettini filled in for him during the interim. On June 10th that year, he managed his 5,000th game in the majors. Only Mack had done so before, though he was still well ahead of LaRussa at that point (7,755 games).

After achieving perhaps his greatest triumph, leading the Cardinals to the 2011 World Series title after they were 10 1/2 games back in late August, he announced his retirement. He was only 35 games behind McGraw on the all-time list for games won. Left open at the time was the question of whether he would manage the National League team in the 2012 All-Star Game, or would be replaced by the Milwaukee Brewers' Ron Roenicke. On January 24, 2012, Commissioner Bud Selig, confirmed that LaRussa would be given the opportunity to manage the NL squad, citing the precedent established in the first All-Star Game in 1933, when John McGraw had come out of retirement to manage the National League team. On May 11, 2012, the Cardinals retired his uniform number 10.

As a manager, LaRussa was a pioneer in the modern usage of relief pitchers, moving from the old "fireman" model where one top relief ace would be used in all tight situations, sometimes for multiple innings, to the "closer" model, where a pitcher is selected to pitch the 9th inning exclusively, and a supporting cast of relievers fills very precise roles (8th-inning set-up man, 7th inning set-up man, left-handed specialist) to ensure a lead is nursed from the time the starting pitcher leaves the game until the closer records the final out. He first put this system in place with the great Oakland teams of the late 1980s that featured future Hall of Famer Dennis Eckersley as closer, with Rick Honeycutt and Gene Nelson in supporting roles. He continued using that model in St. Louis, and in particular made a very large number of mid-inning pitching changes in order to seek successful lefty-on-lefty or righty-on-righty match-ups. The model was very successful, but LaRussa's tactics were criticized for slowing down the pace of the game to a crawl in late innings. They became the standard approach used by almost every manager by the end of the 1990s however. Another pioneering move LaRussa started was batting his pitcher 8th with the Cardinals. At first it was done to ensure that power-hitting first baseman Mark McGwire would have more men on base when he came up, but LaRussa persisted with the move afterwards depending on the personnel available to him, and was imitated by various other managers after a while.

LaRussa's name was back in the news in mid-march of 2012 when it was rumored that he would be offered a senior executive position by billionaire hedge-fund manager Steve Cohen if his bid to buy the Los Angeles Dodgers from the bankrupt Frank McCourt was successful. Cohen was considered the front-runner in the competitive process, but had been criticized for not having many prominent baseball figures - aside from player agent Arn Tellem - on his team. In the end, Cohen's bid fell well short of that made by the group led by Mark Walter and Magic Johnson. In January 2014, his name surfaced again, this time as a leading candidate to replace Chuck Armstrong as President of the Seattle Mariners. However, it was the Arizona Diamondbacks who snapped him up, hiring him on May 17th as Chief Baseball Officer, reporting directly to team President Derrick Hall. Hall explained that the team's top brass were dissatisfied with the team's on-field results and were looking to LaRussa to right the ship. One of his first important decisions, on September 5th, was to fire General Manager Kevin Towers. He replaced him with Dave Stewart, his former pitching ace for the Athletics, also bringing on DeJon Watson as Vice-President for baseball operations, on September 25th and the next day fired manager Kirk Gibson and bench coach Alan Trammell, although he asked Trammell to stay on as interim manager for the team's final three games. On October 13th, he introduced Gibson's replacement, Chip Hale, who had formerly been Oakland's bench coach and had previously been a coach with the D-Backs. He also picked his former pitching ace with Oakland, Dave Stewart, to be the team's new GM. In 2016, he came into the broadcasting booth to argue with Pirates announcer Greg Brown about comments Brown had made about LaRussa's teams using retaliatory pitches to hit batters. That season was terrible for Arizona, who thought they would be competitive after signing P Zack Greinke to a huge contract in the off-season, but ended up just a game out of last place. Both Hale and Stewart were fired at the end of the year, and LaRussa lost control of baseball decisions to team President Hall, who relegated him to an adviser role. With him pretty much sidelined, the Diamondbacks had their best season in years in 2017, and a few days after the team was eliminated from the postseason, it was announced that he was leaving the organization. On November 1st, he joined the Boston Red Sox front office with the title of Vice-President and Special Assistant to the President of Baseball Operations, i.e. to David Dombrowski.

Away from the diamond, LaRussa is also an attorney. He graduated from Florida State's law school in 1978, and passed the bar exam the next year. LaRussa's biography at mlb.com claims that each of LaRussa's four predecessor lawyer-managers at the major league level are in the Hall of Fame. This is not true, though, as Judge Fuchs is not in the Hall. LaRussa's election to Cooperstown was a foregone conclusion from the time he stepped down. On December 9, 2013, on his first appearance on the Veterans Committee's ballot, he was elected unanimously, as were his exact contemporaries Torre and Cox. All three were inducted on July 27, 2014, as were three contemporary players - Greg Maddux, Tom Glavine and Frank Thomas.

Another of LaRussa's interest is supporting animal shelters. His interest in the topic began when he picked up a stray cat roaming around the Oakland Coliseum in 1990, with the thought of giving it to a local animal shelter. However, he realized the cat would be euthanized if he did so, so he adopted it and established the Animal Rescue Foundation, whose aim is to give a home to animals who would otherwise be put to death. He and his wife financed the construction of a compound in Walnut Creek, CA where the animals are kept and matched with potential owners, including returning veterans (animal companionship has proved to be effective in easing the symptoms of post-traumatic stress). He himself has 17 cats at home, each of which has a name.

"If you think about it seriously, there is no way that you can apply Moneyball-type analysis to people that are involved in a competition against other people. The basis of Moneyball is very important [...] But [...] the individuals that are competing literally change from day to day [...] they sometimes change within the game itself." - Tony LaRussa

Lost to the Baltimore Orioles in the ALCS, 1-3

Defeated the Boston Red Sox in the ALCS, 4-0
Lost to the Los Angeles Dodgers in the World Series, 1-4

Defeated the Toronto Blue Jays in the ALCS, 4-1
Defeated the San Francisco Giants in the World Series, 4-0

Defeated the Boston Red Sox in the ALCS, 4-0
Lost to the Cincinnati Reds in the World Series, 0-4

Lost to the Toronto Blue Jays in the ALCS, 2-4 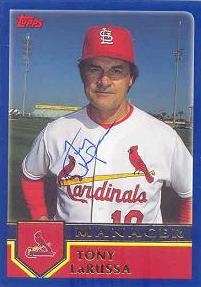 Defeated the San Diego Padres in the NLDS, 3-0
Lost to the Atlanta Braves in the NLCS, 3-4

Defeated the Atlanta Braves in the NLDS, 3-0
Lost to the New York Mets in the NLCS, 1-4

Lost to the Arizona Diamondbacks in the NLDS, 2-3

Defeated the Arizona Diamondbacks in the NLDS, 3-0
Lost to the San Francisco Giants in the NLCS, 1-4

Defeated the Los Angeles Dodgers in the NLDS, 3-1
Defeated the Houston Astros in the NLCS, 4-3
Lost to the Boston Red Sox in the World Series, 0-4

Defeated the San Diego Padres in the NLDS, 3-0
Lost to the Houston Astros in the NLCS, 2-4

Lost to the Los Angeles Dodgers in the NLDS, 3-0