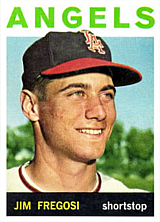 Jim Fregosi was one of the best shortstops of the 1960s and a six-time All-Star for the Los Angeles/California Angels. He later managed for many years, winning a National League pennant with the Philadelphia Phillies.

Fregosi attended Junipero Serra High School in San Mateo, Califonia, where he was a teammate of future major leaguer Tim Cullen and scouting director Gary Hughes; Fregosi was the best athlete of the three, as he was also the school's quarterback, a basketball player, and the state's broad jump champion. Despite several scholarship offers, he was signed by Boston Red Sox scout Charlie Wallgren in 1960 for a $20,000 bonus. He made his pro debut with the Alpine Cowboys of the Sophomore League that summer, hitting .267 in 112 games.

Following the 1960 season, Fregosi was left unprotected in the expansion draft and selected by the Angels. He spent most of 1961 season with the Dallas-Fort Worth Rangers of the American Association, posting a .254 average in 150 games. This earned him a September call-up to the majors, hitting .222 in 11 games. He began 1962 in the minors but was back with Los Angeles in July and hit .291 in 58 games. On September 10th, he hit his first big league home run off Dick Stigman of the Minnesota Twins.

Fregosi became the Angels regular shortstop in 1963 and immediately showed an ability to hit for a decent average along with moderate power and some stolen bases. That summer, he hit .287 with 9 homers, 12 triples, and 29 doubles. The following year, 1964, he had perhaps his best overall season, hitting .277 (30 points over the league average) with 72 walks, 18 home runs, and 9 triples. His OPS+ that year was seventh best in the American League, and he earned his first trip to the All-Star Game.

Fregosi continued to star for the team, now known as the California Angels, winning a Gold Glove in 1967 and leading the AL with 13 triples in 1968. He missed nearly a month of the 1971 campaign due to foot surgery, and his average that year dipped to .233. Following that season, he was a key component of what is widely viewed as one of the most lopsided trades in baseball history. On December 10th, he was sent to the New York Mets for four players, one of whom was future Hall of Famer Nolan Ryan. Ryan went on to average 17 wins and over 300 strikeouts a year in eight seasons in California. The Mets starting third baseman in 1972, Fregosi struggled with a thumb injury and hit just .232 in 101 games. After another half season in New York, his contract was sold to the Texas Rangers. He performed a bit better there, hitting .257 with 28 home runs in about 4 years with the club. Midway through the 1977 campaign, he was traded to the Pittsburgh Pirates for Ed Kirkpatrick and played for the Bucs for parts of the first two months of the 1978 season. 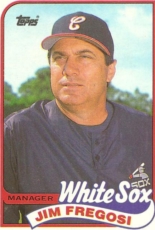 Midway through the 1978 season, California owner Gene Autry decided he wanted Fregosi to replace Dave Garcia as manager of his club. The Pirates agreed to release him, and he took over the helm of the Angels. He could have been a player-manager, but decided to retire from the field in order to concentrate on managing. He led the team to a respectable second place finish that year and guided the club to its first division title in 1979, falling to the Baltimore Orioles in the ALCS. After losing Nolan Ryan to free agency and suffering numerous injuries to key players, the team fell to sixth place in 1980. Following a slow start in 1981 despite the team spending lots of money on big name free agents, he was fired by Angels GM Buzzie Bavasi.

After a year away from baseball, Fregosi became manager of the Louisville Redbirds in 1983 and led the team to a runner-up finish in the American Association. The following two seasons, his club won league titles. Midway through the 1986 season, he left Louisville and replaced Tony LaRussa as skipper of the Chicago White Sox. In two and a half years with the Sox, he led the team to three fifth-place finishes.

Fregosi was away for the game for another two years before taking over from Nick Leyva as Philadelphia Phillies manager in early 1991. Following a last place finish in 1992, he led the team to a National League pennant the next year, defeating the favored Atlanta Braves in the NLCS. Unfortunately, Philadelphia fell to the Toronto Blue Jays in six games in the World Series. He spent three more years as Phillies manager but never again finished above .500.

Fregosi spent two years in the San Francisco Giants front office before becoming manager of the Toronto Blue Jays in 1999. In two seasons with the club, he posted records just above .500 and a pair of third-place finishes. He later became a Special Assistant to the General Manager of the Atlanta Braves, a position he held for 13 years.

Fregosi was taking part in a Caribbean cruise with a number of other former major league greats when he suffered multiple strokes on February 11, 2014. He was quickly evacuated to a hospital in Miami, where his condition was listed as critical. He died three days later at age 71. On March 5th, family and friends including a number of his former players, such as Dave Hollins and Mickey Morandini, and teammates including Kent Tekulve, Pete Mackanin and Bobby Knoop, gathered to pay him tribute at Bright House Field in Clearwater, FL prior to a Grapefruit League game between the Phillies and Braves.

Fregosi's son, Jim Fregosi, Jr. played professionally from 1985 to 1989, scouted for the Phillies, and worked in the Kansas City Royals front office.