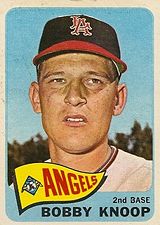 Second baseman Bobby Knoop was an excellent fielder and won three straight Gold Gloves with the California Angels from 1966 to 1968. However, he struggled at the plate, hitting just .236 during his career and striking out more than 100 times in his first five seasons in the majors. His best year at the plate came in 1966, when he hit 17 home runs and led the American League with 11 triples.

Following his playing days, Knoop was a coach for the Chicago White Sox in 1977 and 1978 before serving on the Angels staff from 1979 to 1996. He was also a Toronto Blue Jays coach in 2000. He was a pro scout for the Colorado Rockies in 2008 and a senior advisor for player development in 2009. In 2013 he returned to the coaching ranks as infield coach of the Los Angeles Angels of Anaheim. Knoop announced his retirement in February 2019 [1].