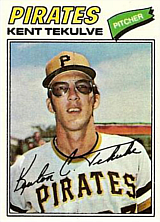 "The toughest pitcher for me was a relief pitcher by the name of Kent Tekulve. He was a submarine pitcher, 6-foot-5, lanky, and threw at a very difficult angle from down around his ankles . . . " - Ron Cey

Bespectacled submariner Kent Tekulve pitched in over 1,000 games at the major league level, all in relief. In sixteen big league seasons, spent mostly with the Pittsburgh Pirates, he recorded 184 saves.

Signed by the Pirates in 1969, Tekulve first reached the majors in 1974. He became the club's closer in 1978, recording 31 saves while leading the National League with 91 appearances. The next summer, 1979, he again saved 31 while once again pacing the NL with 94 games pitched. Pittsburgh reached the World Series that October, and he saved three games in the Fall Classic against the Baltimore Orioles, including the seventh and deciding contest.

Tekulve's save total dropped to 21 in 1980, but he made the All-Star team for the only time in his career. Early in the 1985 season, he was dealt across the state to the Philadelphia Phillies in return for Al Holland. He spent nearly four years in Philly before ending his career with the Cincinnati Reds in 1989.

When Tekulve retired, he had made 1,050 relief appearances, a record at the time; Jesse Orosco broke that mark in 1999. He still holds the major league record for the most games as a pitcher without making a start. A certified workhorse, he appeared in 90 or more games in three separate seasons. As of 2019, the only other pitchers to accomplish this are Mike Marshall (also 3 times), Pedro Feliciano, Wayne Granger, and Salomon Torres.

On the mound, Tekulve's repertoire included a sinker, a slider, and a slow curve that he used as a changeup.

In 1990, Tekulve worked for the Pirates community relations office. He was then a Phillies broadcaster from 1992 to 1997. He later worked for two years as the director of baseball operations for the Washington Wild Things. In 2006, he was hired by the Pirates as their first advance scout in four years. He held the job for two years, after which Pittsburgh again abolished the position. He became a studio analyst for FSN in 2008.

Kent appeared on an episode of Mister Rogers' Neighborhood in 1983, tutoring youngsters on the finer points of playing baseball.