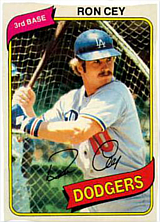 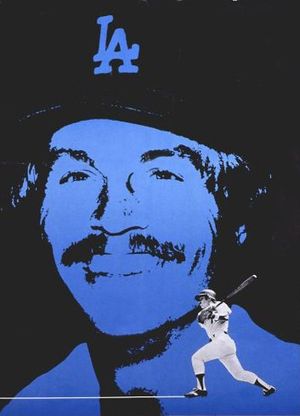 Ron Cey was part of the vaunted Los Angeles Dodgers infield of the 1970s and early 1980s that played together longer than any other infield - approximately ten years. Baseball statistics guru Bill James said that Cey was actually a bit better than the other infielders - Steve Garvey, Davey Lopes, and Bill Russell - all of whom combined to give the Dodgers a solid core of four players year after year.

Cey played five seasons in the minors, from 1968 to 1972, hitting .322 with a .538 slugging percentage. He became a major league regular in 1973 after having major league cups of coffee in 1971 and 1972. He started the 1977 season insanely hot, with 37 RBI in his first 28 games, finishing with a career-high 110. He was also a good home run hitter, with over 300 dingers in his career, even though Dodger Stadium was not considered a good hitter's park. He came up after Steve Garvey had been tried at third base and was part of the World Series teams in 1974, 1977, 1978, and 1981, winning the Babe Ruth Award and sharing World Series MVP honors in '81. If the Cincinnati Reds of 1975 and 1976 had not been invincible, the Dodgers might well have gone to the Series in those years, too. Cey joined the Chicago Cubs in 1983, and was the clean-up hitter and top RBI man for the division-winning Cubs in 1984. He finished his career with the Oakland Athletics in 1987, a year in which Reggie Jackson also finished his career with the A's and in which Mark McGwire won the Rookie of the Year Award for his play with the A's.

Although he spent most of his career with the Dodgers, the site Bleed Cubbie Blue chose Cey as the #71 Cub of all time. In between Ron Santo (who left the Cubs after 1973) and Aramis Ramirez (who joined the Cubs in 2003), Ron was the player who spent the most time at third base for the Cubs.

"The Penguin" always had a walk that looked like he could not possibly be a decent fielder, but his range factors at third base proved otherwise. He also had a good on-base percentage at a time when walks were not much appreciated by fans. In a 17 year career, his slash line was .261/.354/.445 with 316 home runs and 1,139 RBI. Based on similarity scores, the most similar player by far to Cey is Robin Ventura. There are distinct similarities, but Ventura played in an era when hitting was easier.

Cey appeared five times on television shows, but never as a substitute for Burgess Meredith as Penguin on the Batman series with Adam West. He appeared once on Columbo and once on Murder, She Wrote. In 1976, he recorded a single called "Third Base Bag" which was played regularly at Dodger Stadium but otherwise failed to become a hit. The B-side was another baseball-themed song, "One Game at a Time".

Cey once worked for the Dodgers' Marketing and Community Affairs department. As of June 2008, he was part of the Dodgers' Speakers Bureau. Here is a 2008 photo: Cey, Scully and Lasorda. His son, Dan, played in the minors.