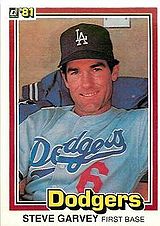 Arguably the best player of the Los Angeles Dodgers of the 1970s, Steve Garvey won the 1974 All-Star Game Most Valuable Player Award as well as the National League MVP Award and capped off his Dodger career with a World Series championship in 1981. He was signed by the San Diego Padres as a free agent after the 1982 season. From 1975 to 1983, he played in a National League record 1,207 consecutive games. Garvey was often mentioned as a potential candidate for elected office after he retired, but the revelation that he had several illegitimate children dashed any political ambitions.

Garvey was not elected to the Hall of Fame in the 15 years of voting by the BBWAA, and first came under consideration by the Veterans Committee on its 2018 ballot.

Garvey had been a sports star at Michigan State University in the late 1960s, and came up with the Dodgers for the first time at age 20 in 1969. He was tried for parts of three years at third base and then moved to first base when Ron Cey came up. He, Cey, Davey Lopes and Bill Russell formed the strong infield nucleus for the Dodgers that was together for a longer period than any other major league infield (approximately ten years). In his first season as a full-time first baseman, in 1974, he was voted a starter in the All-Star Game as a write-in candidate, then won the MVP Award after the Dodgers captured the NL pennant.

Garvey was a huge star in the 1970s, even having a junior high school named after him in 1977. He, Pete Rose, and Reggie Jackson were probably the best-known names in baseball at the time. Although Garvey's home runs and high batting averages were well-known, sports fans of the time generally didn't realize that his slugging percentage and on-base percentage often left something to be desired (he referred to himself as a "contact hitter"). He won four Gold Gloves, because he was a mobile and consistent first baseman, although his arm was sometimes criticized. In addition to his MVP award in 1974, he was second in the MVP voting in 1978. As Bill James, mentioned, he had basically the same season each year from 1974 to 1980, hitting .300 with 200 hits and 100 RBI every year, but his MVP support fell down significantly after his initial win. He placed a lot of importance on collecting 200 hits and would consciously amass a large number of bunt hits every year even though he was not a particularly fast baserunner. He played on Dodger championship teams in 1974, 1977, 1978, and 1981, and although past his prime in 1984, was a regular on the San Diego Padres team that went to the World Series, when he was the MVP of the League Championship Series. In particular, his 9th-inning run off Lee Smith that ended Game 4 of that series is considered the greatest moment in San Diego's sports history. His number 6 was the first one to be retired by the Padres, in April of 1988, less than a year after he played his last game. His National League teams never lost a division or league championship series and advanced to the World Series in each of his five years playing in the postseason.

Garvey appeared in ten All-Star Games, winning all of them: this is the record for the most wins by a player who never lost an All-Star Game (Joe Morgan was 9-0, and Tom Seaver 8-0). From 1983-1985, Garvey had a 193-game errorless streak - a record for first basemen. The previous record was held by Mike Hegan, who had 178 straight errorless games. Kevin Youkilis broke his record in 2006-2008.

Garvey's career ended in 1987 after surgery on a torn biceps tendon in his left shoulder. He was non-tendered for the 1988 season and retired. He then filed a claim for damages of approximately $3 million under the Global Settlement Agreement established after team owners were found guilty of collusion. He alleged that after the 1985 season, his contract was not extended into the 1988 and 1989 seasons as a result of collusion. His claim against the Major League Baseball Players Association was rejected by an arbitrator in 1996 because he had failed to present sufficient substantiating evidence. This decision was appealed by Garvey, and the Court of Appeals for the 9th District overturned the arbitrator's decision and ruled that the only decision that the arbitrator could have taken, in light of the evidence submitted by Garvey, was to award him the amount claimed. This decision was then in turn appealed to the Supreme Court by the MLBPA, on the basis that according to numerous precedents in the field of labor law, the Appeals Court should not have reviewed the merits of the arbitrator's decision, but should simply have demanded another ruling if it had found a flaw in the procedure (which was not the case). In 2001, the Supreme Court found in favor of the MLBPA, letting the original arbitrator's decision against Garvey stand.

As of 2004, he was serving as a vice president of the Baseball Assistance Team. An article in the Los Angeles Times in April, 2006 indicated that Garvey has had substantial problems paying off debts from his high-level lifestyle, including the large amount of money he had to pay for child support from his numerous extra-marital affairs. He had been employed by the Dodgers since his retirement as a special ambassador and working in community relations, but in 2011 he was fired for putting out feelers about constituting an ownership group to buy the team from the troubled Frank McCourt ownership. With McCourt waging a desperate battle not to lose the team because of financial pressures closing around him, he did not appreciate that a team employee was circling around the corpse. Garvey had apparently recruited former Dodgers pitcher Orel Hershiser and some serious financial backers in putting together his bid.

According to the similarity scores method, the most similar player to Garvey is Al Oliver. One out of the ten most similar players to Garvey is in the Hall of Fame, that one being Orlando Cepeda. Others include Bill Buckner and Cecil Cooper, first basemen of the same era whose game was also based on a high batting average rather than power, and who collected a lot of RBI from hitting in the middle of a lineup with decent table-setters. 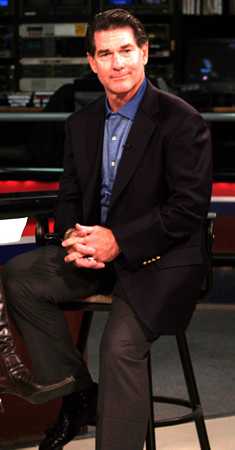 Many fans thought that Steve Garvey would be elected quickly to the Hall of Fame, simply because he was so famous. This did not happen. In retrospect, although he was a huge star, his numbers seem a bit short, with 272 home runs, 1,308 RBI, and 2,599 hits. On the other hand, he was a ten-time All-Star, an MVP once and second in the MVP voting another time, a player who appeared in 22 World Series games, hitting 8 home runs with a .356 batting average. He is in the top 100 players of all time for career games played, at bats, hits, total bases, singles, doubles, RBI, and sacrifice flies. He exhausted his 15 years of eligibility for Hall of Fame voting by the Baseball Writers Association of America, having received around 40% of the vote in the first few years and closer to 25% of the vote in his last ones. He dropped off the ballot after the 2007 Hall of Fame Election, in which he obtained 21.1% of the vote. He first came under consideration by the Veterans Committee in the vote for the 2018 class, falling short as Jack Morris and Alan Trammell got the nod. He was again under consideration in 2020.

Ken Haag, with James Floto and David Marasco at The Diamond Angle, wrote a good article about Garvey's inclusion, or non-inclusion, in the Hall of Fame. Haag principally makes the case for inclusion based on his average and hit counts:

But Marasco is far more skeptical, pointing out that Garvey's OBP was profoundly low and never once exceeded Jackson's; moreover, Garvey's slugging percentage never exceeded .500, while Jackson led the league three times. Garvey's fielding percentage is also suspect as a measure of his ability.

Of course, how Garvey compares to Reggie Jackson's non-home run statistics is irrelevant to the Hall of Fame, since Reggie is in the Hall because of his home runs and RBI, while Garvey would have to get in on other grounds. Historically, a .294 batting average hasn't been nearly enough, and 2,599 hits hasn't been enough either.