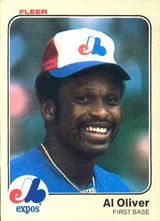 "When it came to hitting ... all he ever did was crush the ball. Al was the perfect number three hitter because you knew he was going to make contact." - Willie Stargell 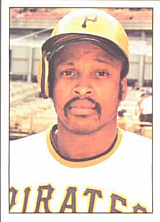 Al Oliver was an excellent hitter, batting .303 over an 18-year major league career and making the All-Star team seven times. During his career, he also won Silver Slugger awards as an outfielder, a designated hitter, and a first baseman.

Oliver was born and raised in Ohio and attended Portsmouth High along with fellow future major leaguer Larry Hisle. In addition to being baseball MVP there, he was also All-Ohio in basketball. After graduation in 1964, he signed with the Pittsburgh Pirates. He advanced through the minors and hit .315 with the Columbus Jets in 1968 to earn a September call-up with Pittsburgh. He never returned to the minors.

In his first full big league season of 1969, Oliver became the Pirates regular first baseman and hit .285 with 17 home runs, finishing tied for second behind Ted Sizemore in National League Rookie of the Year voting (and just ahead of his high school teammate Hisle). The next year, he split time between first base and the outfield before being installed as the Pirates' center fielder in 1971. He starred for the team in the 1971 NLCS, hitting a three-run homer in Game 4, and the Pirates went on to win the 1971 World Series over the Baltimore Orioles in seven games. In 1972, Oliver hit .312 and made his first National League All-Star team. He hit .321 in 1974 and did even better in 1976, batting .323. After posting a .308 average in 1977, he was traded to the Texas Rangers as part of a four-team deal.

In each of four seasons with the Rangers, Oliver finished among the top ten in the American League in batting average, never falling below the .309 mark. In 1980, he had his best year to date, recording 209 hits and driving in 117 runs, and on August 17th of that season, he hit four home runs in a doubleheader against the Detroit Tigers. He was moved from the outfield to designated hitter the next summer and was sent to the Montreal Expos for Dave Hostetler and Larry Parrish prior to the 1982 season.

Oliver became the Expos' everyday first baseman in 1982 and responded with the finest season in his career. He led the NL with a .331 average, 43 doubles, and 204 hits, and tied Dale Murphy for the RBI lead with 109. He became the first big leaguer to have a 200-hit, 100-RBI season in both leagues and finished third in Most Valuable Player voting that year. In 1983, his average slipped to .300 (his lowest since 1975), but he still led the NL with 38 doubles.

Prior to the 1984 season, Oliver was traded to the San Francisco Giants, and late in the campaign, he was sent to the Philadelphia Phillies. The following spring, in 1975, he was dealt to the Los Angeles Dodgers before being swapped to the Toronto Blue Jays in July. He provided some postseason heroics for the Jays, hitting .375 in the 1985 ALCS, but after the season, he was granted free agency and retired.

Oliver ended up with 2,743 hits (58th on the all-time list as of 2019) and 529 doubles (43rd on the all-time list). Although he played more outfield than first base, the most similar players are two first basemen, Steve Garvey and Bill Buckner, who, like Oliver, both had over 2,500 hits. There are four Hall of Famers on his similarity list, with the most similar being Zack Wheat at 857.

In 1989, Oliver played for the Bradenton Explorers of the Senior Professional Baseball Association. He hit .274 in 38 games with the club.

Oliver was eligible for the Hall of Fame in 1991. However, he only received 19 votes on the first ballot and was knocked out of future consideration. In 2007, as one of 27 former players on the Veterans Committee ballot, he ranked 13th with 17% of the vote.

Away from the diamond, Oliver hosted the "Al Oliver Show" on Channel 22 in Pittsburgh in the mid-1970s. He was known as one of the best-dressed men in baseball during his prime.