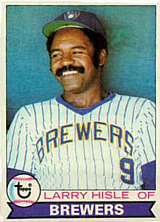 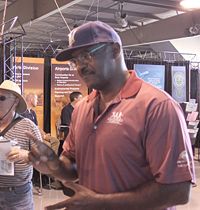 Larry Hisle, who played fourteen years in the big leagues, led the 1977 American League in RBI and was third in the MVP voting in 1978.

A star in basketball as well as baseball in high school, where he was a teammate of Al Oliver, he declined a scholarship to play hoops at Ohio State University in order to sign his first professional contract. He did attend the school in the offseasons, but was not eligible to play sports. Larry never hit less than .300 in the minors, beginning with a .433 average in 21 games with the Huron Phillies in 1966. His first shot at the majors was in 1968, and in 1969 and 1970 he became a regular for the Philadelphia Phillies before spending much of 1971 and all of 1972 back in the minors.

Hisle was just too good to stay in the minors and came back to the bigs in 1973 as a regular again, after having been traded around from the Phillies to the Los Angeles Dodgers to the St. Louis Cardinals to the Minnesota Twins. He hit for the cycle with Minnesota on June 4, 1976 against the Baltimore Orioles. After the 1977 season, he signed with the Milwaukee Brewers as a member of the second big class of free agents. He had one more great year with Milwaukee in 1978, hitting a career-high 34 homers and driving on 115 runs, but a torn rotator cuff suffered in 1979 limited him for the remainder of his playing days, and he made his final appearance in 1982.

He was the hitting coach for the Toronto Blue Jays from 1992 through 1995.