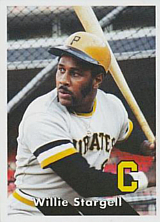 Inducted into Hall of Fame in 1988 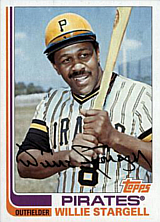 "When they start the game, they don't yell 'Work ball.' They say 'Play ball.' " -Willie Stargell

"If he asked us to jump off the Fort Pitt Bridge, we would ask him what kind of dive he wanted. That's how much respect we have for the man." - Al Oliver

Willie Stargell was not only a Hall of Fame slugger, but during his career was frequently called one of the nicest human beings in major league baseball. He spent his entire playing career with the Pittsburgh Pirates.

Playing primarily in what some refer to as a second dead ball era, the big outfielder and first baseman slugged 30 or more home runs in six different seasons (including four straight from 1970 to 1973) and drove in 100 runs or more five times. When he hit 40 home runs and 40 doubles in 1973, it was quite notable as being rare for the times.

In the batter's box, he used to quickly twirl his bat in a circle toward the pitcher while waiting for the pitcher to get ready. It had a very aggressive appearance and made it clear that the bat was little more than a toothpick to him.

He was the first player to ever hit a home run completely out of Dodger Stadium, a feat he accomplished twice. He also hit the farthest home run in the history of Three Rivers Stadium and the longest home run at Stade Olympique; it was hit off Wayne Twitchell on May 28, 1978. He hit the first home run in the history of Shea Stadium, off Jack Fisher in the 2nd inning on April 17, 1964. It was also the first hit in Shea Stadium. Before his record-setting blast at Stade Olympique, he was known for his prolific home run hitting at the expos' previous home, Jarry Park, where there was a public swimming pool behind the right-field fence; when he retired, the Expos gave him a life buoy from that pool as a gift, in commemoration of all the splashdown homers he had hit there.

After finishing 2nd in MVP Award voting in 1971 and 1973, Stargell finally won the award for his play with the "We Are Family" Pirates in 1979. It was a controversial selection because the aging Stargell had limited playing time, appearing in 126 games, and batted only .281 with 32 home runs, 16 less than league leader Dave Kingman. What tipped the scales in Stargell's favor was his leadership throughout the season, famously awarding teammates gold stars for outstanding play and propelling them to a World Series championship in which he batted .400 with three home runs and winning the Series MVP Award. Even so, he barely scraped by in his NL MVP campaign with several voters leaving him off their ballot altogether. Therefore, Stargell was co-winner of the award, finishing in a tie with batting champion Keith Hernandez of the St. Louis Cardinals.

He was elected to the Baseball Hall of Fame on January 12, 1988 by the Baseball Writers Association of America. His #8 was retired by the Bucs at the end of his final season, 1982.

He died on April 9, 2001 the day of the debut of the Pirates' new field, PNC Park. There is a statue of him outside the ballpark.

His first baseball card appearance was in the 1963 Topps set. On July 20, 2012, the United States Postal Service issued a commemorative stamp with his likeness as part of a series of four stamps honoring Hall of Famers.

"When I played, there were 600 baseball players, and 599 of them loved Willie Stargell. He's the only guy I could have said that about. He never made anybody look bad and he never said anything bad about anybody." - Joe Morgan