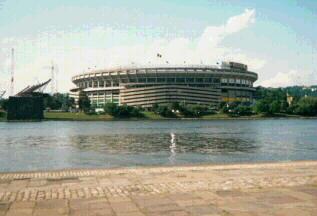 Three Rivers Stadium, located in Pittsburgh, PA was the former home of Pittsburgh Pirates. It was a mixed-use stadium located on a lot near the Allegheny River in downtown Pittsburgh, and also served as the home of the National Football League's Pittsburgh Steelers.

Construction of the Coliseum-shaped facility began in 1968 and it was slated to be ready in time for the start of the 1970 season, but construction delays forced the Pirates to open the year at Forbes Field. Their first game at the new facility was on July 16th, against the Cincinnati Reds in what turned out to be a preview of that year's National League Championship Series. The ballpark would go on to host a number of other NLCS games, as well as two World Series - both won by the Pirates - in 1971 and 1979. On October 13, 1971, the ballpark was host to the first night game in World Series history. The 1974 All-Star Game was played here, as was the 1994 All-Star Game.

The ballpark featured artificial turf and symmetrical dimensions in the outfield, a configuration typical of the "cookie-cutter stadiums" that were popular in the 1970s but which have all since been demolished. For Three Rivers Stadium the end came in 2000. The Pirates played their final home game there on October 1st. The stadium was demolished the following February, after the end of the Steelers' final season in the facility. Both the new PNC Park and the Steelers' Heinz Field were erected on the same site, in areas previously occupied by Three Rivers massive parking lots, and an urban park was built between the two new facilities. That construction project marked a major milestone in the revitalization of Pittsburgh's downtown.