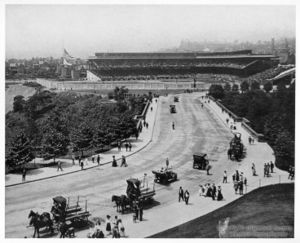 One of the first steel-and-concrete ballparks, Forbes Field opened on June 30, 1909 as home of the Pittsburgh Pirates. Its building cost of over $1 million was the highest ever to that point, almost three times as much as Shibe Park in Philadelphia, PA which had opened that same year. It featured such modern amenities as elevators to take rich patrons to third-level boxes, and an underground parking garage for motorcars. That season the Pirates won their first World Series title. The three Series games in Pittsburgh that year outdrew the entire 1907 and 1908 World Series due to the park's size (it seated overr 30,000). The stadium was also known as Schenley Park.

The land for the park was acquired with the help of industrialist and philanthropist Andrew Carnegie. At the time, the Oakland neighborhood was still home to cows and livery stables, but the area has since become a bastion of higher education, as both the University of Pittsburgh and Carnegie Mellon University are located there. Pitt still is home to part of the Forbes Field wall. Much of the former Forbes Field site is occupied by Pitt's Hillman Library and Forbes Quad. 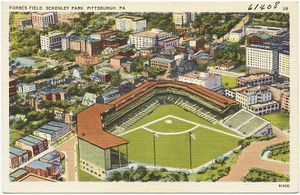 A haven for triples and contact hitters, Forbes Field was not friendly to sluggers. In 1947, this was changed when the bullpens were moved from foul ground to left field, cutting 30 feet, to accommodate Hank Greenberg, who joined Pittsburgh that season. The area was called Greenberg Gardens. When Greenberg retired, the area was renamed Kiner Korner, after Ralph Kiner, who became the dominant slugger in the National League. Forbes Field was home to a couple of famous long balls - Bill Mazeroski's 1960 World Series winner and Babe Ruth's final three homers.

Forbes Field was also the temporary home for the Negro League Homestead Grays in 1939 after the demise of Greenlee Field the previous off-season. The Grays moved to Washington, DC's Griffith Stadium for the 1940 season and remained there for their final 11 years.