Inducted into Hall of Fame in 1956

''. . . when I first saw him at bat, he made my eyes pop out," - Joe DiMaggio, quoted at the Hall of Fame page for Hank Greenberg

Hank Greenberg was one of the great sluggers of the 1930s and 1940s. A fearsome batsman who hit 40 or more homers four times during his 13-year major league career, he retired with a .313 BA and a 41 percent OBP. He easily rates as one of the Tigers' greatest players of all-time, and has his life-size sculpture featured at Comerica Park.

Greenberg lost more prime years than most to service for his country, as he originally went in during May 1941 and stayed in after Pearl Harbor through part of the 1945 season. He was still quite good when he returned in 1945, so it is clear that he could have hit at least 100+ more home runs if he had not missed the time.

He was married to Carol Gimbel, whose family owned a chain of department stores. Hank and Carol's son Steve worked for Major League Baseball in the Office of the Commissioner for many years.

He was the first player to hit 25 home runs in a season in both major leagues (Johnny Mize joined him 3 years later). He was also the first player to win the Most Valuable Player Award at two different positions, as a first baseman and as an outfielder. 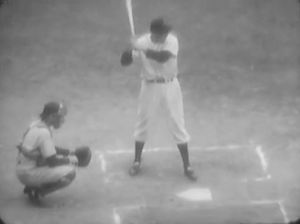 Greenberg's last game before joining the Army in 1941.

He reached base in 18 straight playoff games, a Tigers record until Miguel Cabrera broke it in 2012.

Greenberg started his career with the semi-pro Bay Parkways in Brooklyn in 1929, hitting .454 with 7 homers, 6 doubles, and a triple, collecting 30 hits in 21 games.

After his playing career, he became General Manager of the Cleveland Indians from 1950 to 1957 and the Chicago White Sox from 1959 to 1961, when he was one of the team's co-owners alongside Bill Veeck. He again partnered Veeck when he bought the White Sox a second time in 1975. 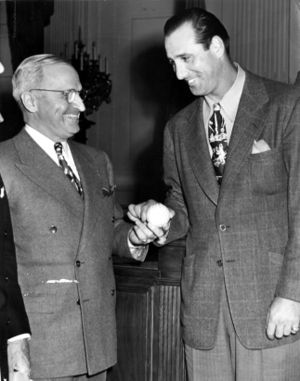 Greenberg meets with Pres. Truman in 1946