Comerica Park is the current home of the Detroit Tigers baseball club. The team moved into Comerica Park in 2000 after playing in historic Tiger Stadium for 87 years and at the corner of Michigan and Trumbull for 103 years. 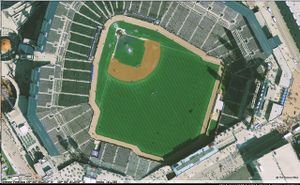 The selling point of Comerica Park is its huge outfield. The dimensions here would be better suited for Coors Field. It got so ridiculous that two years after the Stadium opened, inner fences were built in left field, and in 2005 the empty space was filled with the bullpens. The biggest change in distances was in left-center field; in 2000, it was 395 feet to left-center, but after 2006, it became only 370 feet.

Comerica Park was host of the 2005 All-Star Game. 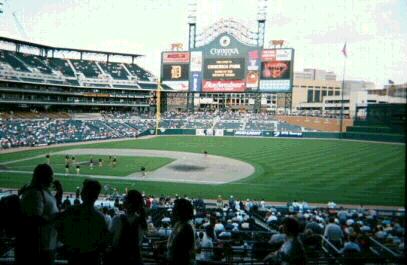 Comerica Park in its inaugural season, 2000 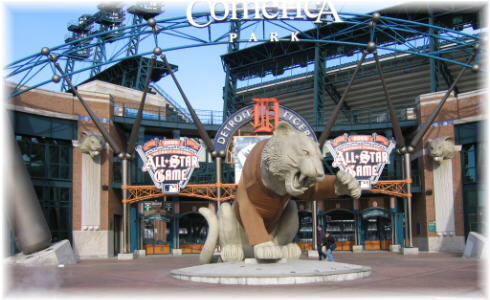 The main entrance of Comerica Park is guarded by a statue of a fierce tiger.
Retrieved from "https://www.baseball-reference.com/bpv/index.php?title=Comerica_Park&oldid=1220769"
Categories: