Home of the Cincinnati Reds, 2003 to present 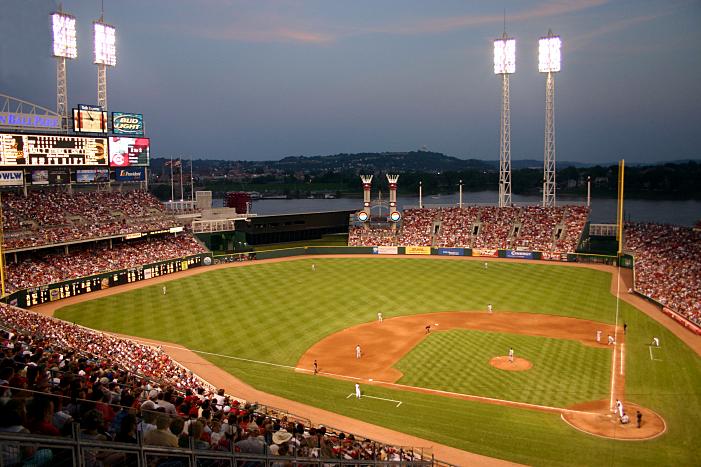 Great American Ball Park is the home of the Cincinnati Reds, opened in 2003. It is located on the shore of the Ohio River. It hosted the 2015 All-Star Game

The ballpark features two large smokestacks in the outfield, meant to recall those on a paddle steamer. The stacks light up when a Reds pitcher strikes out an opponent and shoot fireworks when a Reds batter hits a home run. On May 15, 2015, the chimneys gave out more excitement than expected as one of the stacks caught fire during a game. Luckily, the blaze was extinguished quickly and no one was hurt.

The park features a terrace in front of the main entrance known as the "Crosley Terrace" which includes lifetime statues of former Reds greats created by sculptor Tom Tsuchiya. These are Joe Nuxhall, Ernie Lombardi, Ted Kluszewski, Frank Robinson and Pete Rose. Rose's statue is particularly spectacular as he is featured in full flight, diving head-first into a base, with only his outstretched hands connecting the bronze statue to the ground.

This page is in need of some additional content. Please help the Bullpen by expanding it, or learn how to contribute.
Retrieved from "https://www.baseball-reference.com/bpv/index.php?title=Great_American_Ball_Park&oldid=1017098"
Categories: