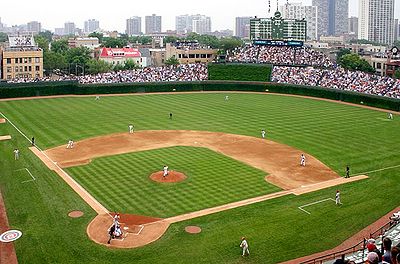 Non baseball usage: Site of the 2009 NHL Winter Classic and of numerous concerts and boxing matches

"You almost wanted to give some of your money back to play there!" - Wally Westlake, who played for six major league clubs but never for the Cubs

For the last ten decades, 1060 W. Addison Avenue has been the site of major league baseball. This is the address of Wrigley Field, the ballpark built by Charles Weeghman for his Federal League Whales on the site of an old seminary (the name of the street on the west side of the park), and is the only remaining Federal League park in use in the majors. The park was built hastily, between March 4 and April 23, 1914 when Chicago's Federal League team played its first home game. The stadium had to be reconfigured after only three home games, because the short left field fence made it too easy to hit home runs. The park was expanded before the 1915 season, and a major expansion and reconfiguration took place after the 1922 season, bringing its current size and location into play.  Wrigley is the second-oldest park in the major leagues still in use, preceded two years by Fenway Park.  It had been the last major league ballpark to install lights.  Wrigley Field hosted its first night game on August 9, 1988 against the New York Mets. 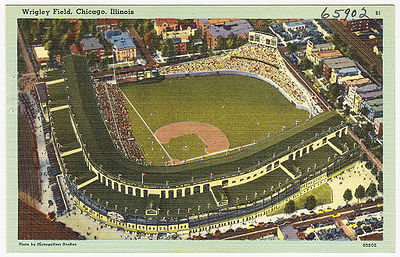 When Weeghman bought out the Cubs as part of the Federal League's "buyout" agreement with the major leagues, he moved the Cubs to the corners of Clark and Addison. The actual corner, by the way, is Clark, Addison and Seminary, but the little triangle of property between Clark, Waveland and Seminary is almost completely owned by the city of Chicago. Before that, the Cubs were known as Chicago's "West Side" team, and played at the by-then antiquated West Side Grounds. Charles Murphy, who still was a part-owner of the team and owned the West Side Grounds, tried to raise money to build a modern ballpark there, but, failing that, sold the lot to the City of Chicago, which built a hospital. The Cubs thus became the city's "North Side" team to stay.

The most famous scoreboard in the National League was built in 1937, the clock four years later. Whenever the late Harry Caray said his famous, "Cubswin! Cubswin! Cubswin!" to the fans on WGN, a blue "W" flew up the flag pole. However, there's been a few too many times the white "L" has gone up the pole, as many diehard Cub fans can attest.

There were a number of plans to replace or renovate the ballpark, beginning in the 1940s when Phil Wrigley tried to purchase the nearby Riverview Amusement Park, which would have provided a bigger site for a ballpark, with room for a parking lot. This went nowhere. In the 1960s, Mayor Richard Daley wanted to build a modern multi-sports stadium that would house both the Cubs and the Chicago White Sox, and also replace Soldier Field as the home of the NFL's Chicago Bears. By then, Wrigley Field's Lake View area had fallen on hard times, with long-time residents moving out and the neighborhood showing signs of blight and neglect. However, the two baseball teams were never ready to entertain a new stadium at the same time, and plans for a common ballpark never went far, while the wave of stadium building in the late 1960s and early 1970s passed the city by.

Bricks and ivy, Caray singing (and drinking), 74 years without lights (lights went on August 8, 1988, and the game was promptly called because of rain after a few innings), and no World Series pennants flying overhead. The Cubs are 8-24 in the World Series since 1914, 17-37 overall in the post-season – and 8-19 at Wrigley Field. The issue of lights was a major one for a few years. The Cubs of the early 1980s were convinced they could no longer compete if lights were not installed at Wrigley, but the city council, bidding to pressure from neighborhood residents, passed an ordinance banning their installation in 1981. In 1984, both home games of the NLCS were played in the afternoon, but the Cubs had to give up home field advantage to have this accepted, and would have had to play some night games at Comiskey Park or elsewhere had they made it to the World Series. Put before that difficult choice, city council relented and allowed for the installation of lights and a limited number of night games. The local neighborhood was undergoing a renaissance, with Wrigley Field at its center. In following years, formal seats were installed on top of buildings across Sheffield and Waveland Avenues (locals had been setting up camping chairs on the roofs for years to watch Cubs games for free, but this became big business as Cubs tickets became a hot item).

Some players don't know how to play the ivy which covers the outfield fence: in 2000, Cubs LF Julio Zuleta didn't notify the umpires that a drive by the Phillies' Kevin Jordan was stuck in the ivy – and a ground rule double turned into an inside-the-park home run. Former Cubs CF Corey Patterson refused to run into the ivy because he knows what's behind it – nothing but bricks.

The 1990 All-Star Game was the park's third – and the first under the lights. 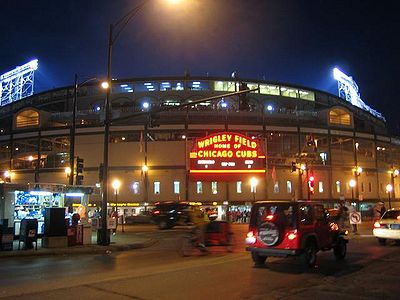 The Cubs in 2003 won only their third Division title in this park, but failed to win their first ever post-season series here (they did manage to win the NLDS down in Atlanta). However, thanks to two blown games in the NLCS against the Florida Marlins (and, some would say, long-time Cub fan Steve Bartman who wasn't paying attention), Wrigley is still waiting to host its World Series game since 1945.

The Tribune Company had worked hard on utilizing every inch of space in this park. Interestingly enough, the problems that made other parks of similar vintage unusable (age, neighborhood, lack of parking, physical plant) haven't happened to Wrigley – yet. People like to use the "El" to get to the park, and the neighborhood around the park hasn't disintegrated.

Plans have been approved for renovations, which would include extending the bleachers over Waveland and Sheffield, adding seats between the dugouts, and moving a lot of the interior storage facilities out to a building on the Waveland triangle. The bleacher additions have been scaled back so as to not infringe on city-owned sidewalks outside the park. For the 2002 season the Cubs put up a green mesh cover over the chain-link fence on top of the back wall of the bleachers, to discourage the "rooftop bleachers" on Sheffield and Waveland.

In the summer of 2004, there were reports of concrete and brick "chunks" falling on patrons at Wrigley Field during games in June and July. The city ordered a thorough inspection of the park's upper deck and mezzanine suite levels. The city and the Cubs declined to release the results of those inspections, but safety netting was placed under the grandstands in several places. An off-season inspection revealed that the park was experiencing premature concrete aging from the endless freeze-thaw cycles that buildings in Chicago are subject to due to the harsh winters. The safety nets may stay up for the foreseeable future, although one of new owner Tom Ricketts' first announcements after acquiring the park in 2010 were renovation plans, addressing the structural issues in the roof, the creation of a "Cubs Alley" immediately west of the ballpark modeled on the area around Boston's Fenway Park. However, with the state of Illinois in a difficult fiscal situation, no public money was available to help Cubs ownership with the most ambitious aspects of the project that affect public streets, and such remodeling had to wait for better economic times.

In January of 2012, Ricketts announced more upgrades for the upcoming season: the construction of additional premium seating for groups on top of the right-field bleachers, modeled after Fenway Park's Green Monster seats, topped with a state-of-the-art 75-foot scoreboard. Another $300 million renovation plan was announced a year later, in anticipation of the park's 100th birthday in 2014. It included more concession stands and restrooms, a wider concourse and the reconstruction of the upper deck. The clubhouse and underground batting cage would also be expanded. The changes were in response to suggestions from fans and players. These ambitious plans required approval of the city of Chicago, which was more complicated than expected, as Mayor Rahm Emanuel had to balance the Cubs' wishes with those of nearby residents. On April 15, 2013, an agreement was announced, which would allow Ricketts to make $500 million worth of renovations, in exchange for the right to play a greater number of night games and to develop some nearby property into commercial ventures that would create additional revenue streams. No public funding was to be used, and the main losers in the deal appeared to be the owners of rooftop stands across the street, who risked seeing their view of the playing field obstructed by the addition of the new electronic scoreboard. However, the renovations, which were supposed to start after the season, ran into some delays; before the start of the 2014 season, Ricketts announced that they would now start the following off-season; the opposition of roof-top owners and the threat of a lawsuit was the main obstacle invoked for the delays. On May 21st, unable to find an agreement with neighbors, Ricketts announced that he would press ahead nonetheless and would submit a plan to the City of Chicago's Commission on Landmarks. He explained that he could no longer wait and that he needed to "put the team and the fans first." The plans that he released would indeed block rooftop views, but he warned that if the Cubs were not allowed to "control our ballpark", he would consider moving to another location. As expected, on August 14th, the rooftop terrace owners filed suit against the Cubs and the city to prevent the renovations.

On April 23, 2014, Wrigley Field became only the second ballpark to celebrate its 100th anniversary as a major league venue, following Boston's Fenway Park by two years. For the occasion, the two teams wore unusual throwback uniforms, as the Cubs were clad in those of the Federal League's Chicago Whales, while their opponents, the Arizona Diamondbacks were dressed as the Kansas City Packers.

In spite of the lawsuits from rooftop owners, renovation work began after the 2014 season, with replacement of the right-field and left-field bleachers the first steps. Those were supposed to be completed for the start of the 2015 season, but the work took longer then expected, with the construction only completed in May in left field, and in mid-June in right field. In 2017, a former rooftop owner was sentenced to 18 months in prison and ordered to pay the Cubs $390,000 in restitution for illegally withholding revenues.

In 2016, the World Series returned to Wrigley Field for the first time since 1945, when the Cubs hosted the Cleveland Indians in Games 3, 4 and 5. The Cubs won the Series on the road at Progressive Field, in Game 7. All three games were night games. After the series, the Cubs went ahead with more improvements to the ballpark, including work on the bullpens, which were moved under the bleachers, creating additional seating.