Home of the Cleveland Indians/Cleveland Guardians, 1994 to present

Southeast of the Lakeshore, near the shores of the Cuyahoga River, stands the Indians' "urban renewal" ballpark Progressive Field, known from 1994 to 2007 as Jacobs Field. It is a mirror image of another similar ballpark, Oriole Park at Camden Yards. The park has triple deck stands in right, a 19-foot high fence in left that goes more or less straight out center field. An opening in left field allows a fantastic view of the Cleveland skyline, including Terminal Tower, beyond the 26' by 37' four-color scoreboard on top of bleachers.

Outside of the park has exposed steelwork reminiscent of bridges spanning the Cuyahoga River in the downtown area. Lights on towers are stacked vertically, instead of horizontally. It's still a poke for hitters to get the ball into the seats.

You can tell you're at "the Jake" if you see gray infield dirt – and you see the huge scoreboard fences in the outfield. Yes, that's right – a main video board and a smaller scoreboard embedded into the outfield fence. 455 consecutive sellouts started this park's life, and it saw its first World Series in its second season of operations, and its first American League pennant fly overhead. Unfortunately, the Indians didn't claim the World Championship in either 1995 or 1997. The World Series returned there in 2016, in the history-making match-up between the Indians and the Chicago Cubs. The epic Game 7, which saw the Cubs break their 108-year championship drought, was played here.

The Tribe was the class of the American League over its first several years, despite losing some key players – Albert Belle, David Justice, Matt Williams, Kenny Lofton and Jim Thome. The park hosted the 1997 All-Star Game (won by the American League, 3-1, for the league's first win since Oriole Park hosted the game in 1993), and was deemed "The Coldest Place On Earth" during the World Series that same year, according to then-NBC analyst Keith Olbermann.

The stadium is located right next to the Quicken Loans Arena, home of the NBA's Cleveland Cavaliers. It is also located about a mile from both Cleveland Browns Stadium and the Rock & Roll Hall of Fame. Outside the ballpark is a plaza named Heritage Park which includes statues of some great figures in Indians history: Bob Feller, Larry Doby, Jim Thome and Frank Robinson.

In November of 2021, the huge sign bearing the name "Indians" was replaced by one with the name "Guardians", shepherding in the team's new identity. 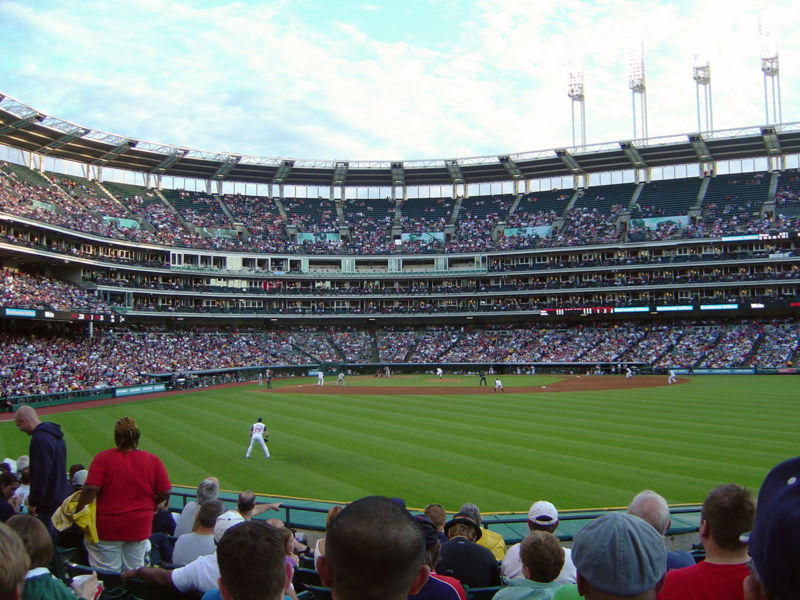