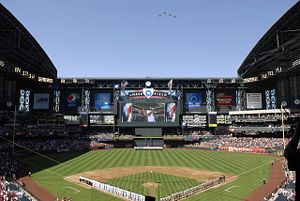 Home of Arizona Diamondbacks, 1998 to present

Chase Field is the only park with a swimming pool in view of the field. Outside the centerfield fence is a large pool available for rent by groups of fans. Home runs routinely land in the pool. The park used natural grass from its opening until 2018, but switched to artificial turf in 2019.

Previously known as Bank One Ballpark, the park was renamed Chase Field beginning in 2006. It has a retractable roof. It was built to coincide with the Diamondbacks' admission into the National League in 1998, as part of that year's expansion and has been the D-Backs' home park for their entire history. The team has a lease with the ballpark that runs through 2028. The ballpark is owned by Maricopa County, which includes the municipality of Phoenix, AZ.

In March 2016, a study was released indicating that the ballpark would need $187 million in upgrades over the remainder of the lease to remain current, an amount of capital that the County does not have. As a result, the D-Backs began talking to partners about alternatives in the Phoenix area. The team was not expected to want to stay in Chase Field beyond 2028 in any case, and indicated it would leave earlier if the County did not keep its end of the deal and ensure that Chase Field remained a top-rank facility for the duration of its use. In August, Maricopa County supervisor Andy Kunasek gave a clear response in a letter to D-Backs President Derrick Hall, accompanying his hand delivery of the letter with an expletive-filled tirade stating "take your stupid baseball team and get out" and (go back to) "f–king West Virginia." On January 3, 2017, the D-Backs filed a suit against Maricopa County, asking that the repairs be performed, or if not, asking that the lease be terminated early. The County replied that a large portion of the repairs were of a cosmetic nature and therefore the responsibility of the team. As the issue headed to arbitration that Summer, a likely lengthy process, a spokesman for the team indicated both the Diamondbacks and Major League Baseball were losing patience over the situation and that a move to another location was not out of the question if a solution was not found quickly. On May 2, 2018 the team and Maricopa County came to an agreement that gave the D-Backs the right to start looking immediately at various options such as relocation or reconstruction of Chase Field in return for dropping the lawsuit. The D-Backs upped the pressure in spring training in 2020 when they revealed that they had visited Vancouver, BC and looked at the indoor facility BC Place as a possible alternative in case problems with Chase Field weer not resolved.