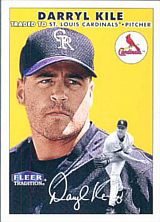 Darryl Kile was signed as a 30th round pick in the 1987 amateur draft by the Houston Astros and scout Ross Sapp.

Kile won 133 games in the majors and would likely have won quite a few more had his career not ended abruptly, since his last three seasons were all pretty good. During his career, he was twice second in the National League in wins, and in his last season was part of a team that went on to win 97 games.

Kile threw a no-hitter against the New York Mets on September 9, 1993 in Houston as a member of the Astros. On August 20, 1998, he set the Colorado Rockies franchise record with 14 strikeouts in a game; that mark would hold for 18 years, until Jon Gray struck out 16 in a game in 2016.

He died of a sudden heart attack while he slept at the team hotel on June 22, 2002. His shocking death caused the postponement of the St. Louis Cardinals' game against the Chicago Cubs that Saturday afternoon. A small "DK 57" sign remains in the Busch Stadium bullpen in his honor.