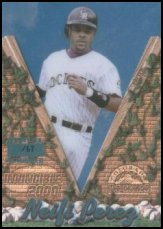 Neifi Perez was one of the most-penalized players in the first years of baseball's new steroid and performance-enhancing drug rules. He was suspended on July 6, 2007, the second time he had been caught in violation of the rules. Less than a month later, before he had finished serving that suspension, he was caught again, this time being suspended for 80 days. As a player could be only suspended once per substance use, Perez had used something improper within that period. He was the only major league player suspended by baseball for stimulant use from 2006 through August 4, 2007. The suspension effectively ended his career.

When he was traded to the Kansas City Royals in 2001, Perez left the Colorado Rockies as their all-time leader in triples with 49.

In 2012, he was inducted into the Caribbean Baseball Hall of Fame along with Joaquin Andujar. Perez had made the All-Tournament Team in both the 1998 Caribbean Series and 1999 Caribbean Series.