Truist Park became the home of the Atlanta Braves starting in 2017 when it replaced Turner Field. It was known as SunTrust Park for its first three seasons, but the name was changed after a corporate merger. The park is located in suburban Cobb County, about 15 miles from downtown Atlanta, GA, in a reversal of the recent trend of constructing ballparks near city centers. While the ballpark is located in Cumberland, GA, it has an official address in Atlanta. 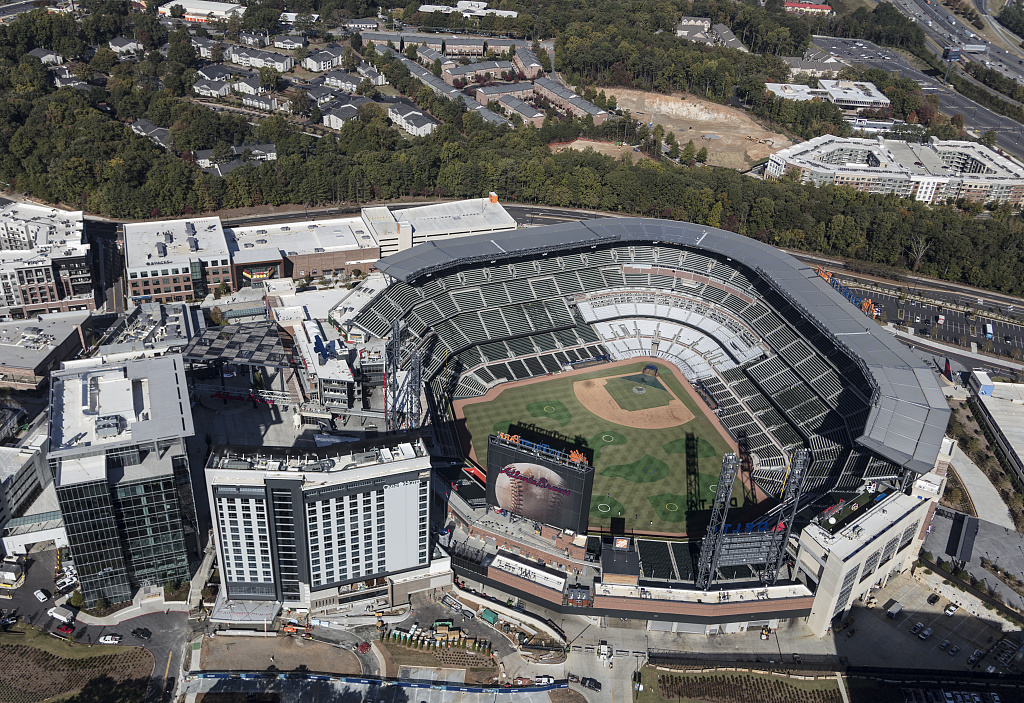 Naming rights for the ballpark were bought by one of the state of Georgia's biggest banks ahead of the groundbreaking ceremony on September 16, 2014. It is an open air facility seating 41,500, located in a new mixed-use village that includes hotels, restaurants, offices and housing. The various planned businesses serve to raise year-round revenue for the Braves and were part of the financing package. Total cost for the facility was estimated at $1.2 billion, with $400 million coming from public coffers.

Among the features of the park is an asymmetrical outfield fence, with a low 6-foot wall in the left field corner. The fence then rises to 8' 8" for most of its length, but in the right field corner, which is 10 feet closer to home plate than the left field corner, it is at 16 feet because of the presence of the Chop House restaurant, from which patrons can watch the game at field level, or on a rooftop plaza that can accommodate up to 300 fans. The deepest spot in the outfield is not in dead center, which is 400 feet away, but slightly left and right of center, where the depth reaches 402 feet. The fence is constituted by a series of straight lines which join at various angle points. All of this is in marked contrast to Turner Field, where the outfield was symmetrical with a curved fence of a uniform height of 8' 4".

The ballpark opened with an exhibition game between the Braves and New York Yankees on March 31st. On that day, a section of Interstate 85 located in downtown Atlanta collapsed after a fire, creating huge traffic problems, including for fans, as the impacted section, while 10 miles south, was on one of the main routes to reach the ballpark from downtown. The official opening day was on April 14th, in the presence of Commissioner Rob Manfred and former President Jimmy Carter, with a game featuring the Braves and the San Diego Padres. Hank Aaron threw the ceremonial first pitch and the Braves won, 5-2, with Ender Inciarte recording the first base hit and scoring the first run in the 1st, and then hitting the first home run in the 6th. The crowd of 41,149 was considered a sell-out. The Braves also sold out the stadium the next day, but attendance quickly settled into the low 20,000s after that. The park seemed to be favorable to hitting doubles and homers over its first few games, but definitely not triples. It took until the tenth game played at SunTrust Park for a batter to finally obtain a three-base hit! After a poor first season, however, the Braves suddenly became contenders, ahead of schedule, in 2018, greatly increasing the demand for tickets.

One of the early popular elements to be introduced at the ballpark was a character called The Freeze, a sprinter dressed in a superhero uniform who races against a fan between innings. Even though the fan is given a huge head start, The Freeze almost always manages to catch up and pass him before the finish line, to the delight of the crowd.

On June 26, 2018, in an episode out of a bad police procedural series, a body belonging to a third-party contractor was found inside a walk-in beer cooler in the park. Local police was called to investigate. Early indications were that the death was accidental, however, as the victim, 48-year-old Todd Keeling, had been in the cooler installing an invention of his design meant to accelerate the pour time of beer, and seemed to have accidentally become trapped, unable to escape.

SunTrust Park hosted its first postseason games in 2018, when the Braves won a division title. It was selected in 2019 to be the site of the 2021 All-Star Game. However, the right to hold the contest was withdrawn by Commissioner Manfred three months before its scheduled date, in response to the State of Georgia's adoption of discriminatory voting rules, a move that gad been urged by President Joe Biden.