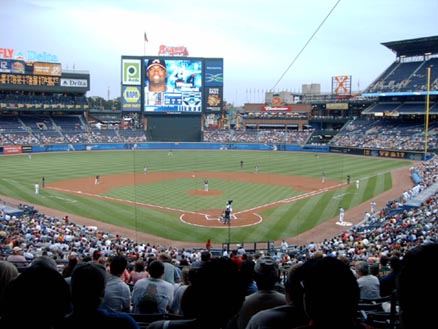 Built in 1996 at a cost of $250 million, Atlanta's Turner Field was the home of the Atlanta Braves from 1997 until 2016. The park was constructed to host the 1996 Summer Olympics and originally seated 85,000 for the Games, with extra bleacher seating forming the stadium's oval. Ironically, it was not used for the Olympic baseball competition, which took place in nearby Atlanta-Fulton County Stadium, located across the street from the new stadium. After the Games, the bleachers were removed, and the stadium was completed in time for the 1997 season.

The park replaced Atlanta-Fulton County Stadium, which has since been memorialized in the form of a wall (representing the stadium's former location) around a parking lot adjacent to Turner Field. The ballpark was renamed after colorful media mogul Ted Turner, who is a former owner of the team.

Following the 2013 season, the Braves announced that they would begin construction of a new ballpark in suburban Cobb County, SunTrust Park, with a planned 2017 opening. The City of Atlanta, which owns Turner Field, explained that it would have cost between $150 million to $250 million to upgrade the stadium in accordance with the Braves' wishes. Instead, the ballpark was scheduled to be demolished after the Braves moved out, making way for a middle class housing development. These plans were not finalized by the time the team played its last season there, and it was unclear what the future would be for the site. The Braves' main complaints about Turner Field centered on the lack of economic development around the stadium, inadequate parking and poor public transit access.

There was a lot of hand wringing when the Braves completed their final season in the ballpark in 2016, given the team had played a mere twenty seasons in a complex that was built at great cost to taxpayers, and that this monumental waste was just the result of greedy baseball owners. However, others pointed to very particular factors that had made this particular park so quickly obsolete, and in particular the fact that it was always a deficient locale, not having been built with baseball in mind, and having little or no cachet of its own. The final game at Turner Field was on October 2, 2016. Following the season, the ballpark was bought by Georgia State University with plans to convert it into a smaller college football stadium. They had until then been playing in the much larger Georgia Dome; the university also had plans to build a smaller baseball field, ironically n the spot where Atlanta-Fulton County Stadium had once stood. There st of the property was to host a $300 million development including housing and retail facilities. The university's main campus is located only a mile from the site.

There were a total of 38 postseason games played in Turner Field, including Games 1 and 2 of the 1999 World Series and the first National League Wild Card Game, on October 5, 2012. It also hosted the 2000 All-Star Game. It was the site of Randy Johnson's perfect game on May 18, 2004. Of the three no-hitters thrown at Turner Field, including Johnson's perfect game, all were thrown by pitchers with the visiting team.