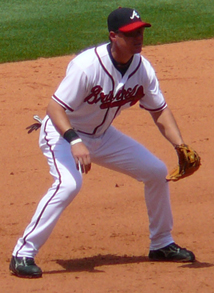 Chipper Jones played 19 seasons in the major leagues, mostly as a third baseman and all with the Atlanta Braves. He was the National League MVP in 1999 and the National League batting champion in 2008. By at least one measure, Jones was the best hitter in the National League in 2007 - he led the NL in Adjusted OPS+, an overall measure of how good a hitter is. Although it was his first time ever leading the league in OPS+, his mark of 166 was not his career best; he had posted an OPS+ of 168 in 1999, and he would go on to record an OPS+ of 174 in 2008. 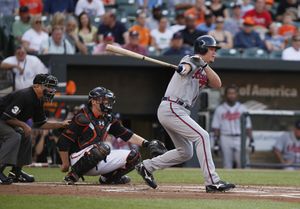 He was the first overall pick in the 1990 amateur draft. He is the all-time National League leader in home runs by a switch hitter, and the career leader for home runs all hit under a single manager, Bobby Cox. As a rookie in 1995, he set a National League mark for most homers by a rookie switch hitter with 23; the mark stood for over two decades until beaten by Josh Bell in 2017. In 2006, he had extra-base hits in 14 straight games, tying the major league record set 79 years prior by Paul Waner.

Inspired by his hot hitting at Shea Stadium, Jones named his son Shea.

Through 2008, there were four Hall of Famers on the list of the most similar players, but all of the others on the list were still eligible for election. Nobody had a similarity score as high as 900, though, showing that Chipper had already become a unique player.

Bill James did a comparison of Chipper Jones and Eddie Mathews in the 2010 Bill James Gold Mine, with Jones coming out quite favorably.

Jones tore his left ACL while making a throw to first base mid-way through the 2010 season, putting his future in jeopardy. However, he underwent surgery and successfully returned to the Braves' lineup for the start of the 2011 season. This marked his first time playing under a manager other than Bobby Cox. In April, he reached 1,500 career RBI, doing so on a homer off Randy Choate. He became the third switch-hitter to that mark, following Mickey Mantle (1,509) and Eddie Murray (1,917). However, he suffered a tear in his right knee on May 14th. He was off to a good start, having started 35 of the team's first 39 games at 3B, and was hitting .275 with 4 homers and 27 RBI when the injury occurred. He decided to forgo surgery and was back in the Braves' line-up two days later, having received a cortisone shot. He finished the year with a .275 average in 126 games, with 33 doubles, 18 homers and 70 RBI. The season ended on a down note for the team, as a 10-20 record over the last month cost the Braves the NL Wild Card on the season's last day.

Jones suffered a scare during the following off-season when he fell into a hole while hunting deer in Kansas in November. He limped back one mile to his vehicle after hearing something pop in his knee, but it turned out to be only scar tissue, and with a bit of rest, he was ready for spring training in 2012. On March 22nd, a few weeks shy of his 40th birthday, he held a press conference to announce that the 2012 season would be his last and that he would be retiring afterwards. Two days later, it was announced that he would require arthroscopic surgery for a torn meniscus in his knee and that he would start the season on the disabled list. Jones returned to action in time to hit a home run on his 40th birthday (taking Aaron Harang deep), only the fifth major leaguer to do so - Bob Thurman, Joe Morgan, Wade Boggs and Tony Phillips preceded him. On May 2nd, Jones and Jason Giambi both hit walk-off homers; the Elias Sports Bureau reported it was the first time two players 40 or older had done that on the same day. He was not one of the original selections to be part of the National League squad for the 2012 All-Star Game, instead having his name be part of the five-name ballot for the "Final Man Vote", but he was named to replace the injured Matt Kemp on July 3rd, before the voting for the final man was completed. It was his 8th All-Star appearance. That same day, he had the third 5-for-5 day of his career, adding 2 doubles, 4 RBI and his first stolen base of the season in a 10-3 win over the Chicago Cubs. In the first game after the All-Star break on July 13th, he hit a solo homer to drive in the 1,595th run of his career. That tied him with Mike Schmidt for the second-most RBI by a player whose primary position was third base, and only one behind George Brett for first place all-time. He passed Brett during a memorable game on July 20th, when he drove in 2 runs in the 8th inning as part of a Braves' comeback from an early 9-0 deficit to win the game, 11-10, in extra innings against the Washington Nationals. He still trailed Schmidt for most RBI collected as a third baseman however, with 1,316 to Schmidt's 1,419; given his intention to retire at the end of the season, that particular record was well out of reach. He ended the season with a .287 average, 14 home runs and 62 RBI. The Braves made it to the Wild Card Game on October 5th against the St. Louis Cardinals, but what turned out to be Jones' final game did not go the way he would have wanted. He was 1 for 5, but committed a key error in the 4th, when the Cards scored three runs on their way to a 6-3 upset win.

On June 28, 2013, the Braves officially retired Chipper's uniform number 10. In December 2015, they hired Jones as a special assistant to General Manager John Coppolella, with his main duties being to work with the team's hitters during the season. He became eligible for the Hall of Fame in the 2018 vote, and while his career numbers made it likely he would sail in, there were some questions expressed by certain voters regarding his character. Following his retirement, he had been vocal on social media with posts of questionable taste, including anti-immigrant rants and posting material denying the Sandy Hook elementary school massacre, the type of actions that had hurt Curt Schilling's candidacy. However, while a few voters noted that they did not appreciate his social media comments, no one apparently held it against him enough to deny him their vote, as he finished ahead of all other candidates with 97.2% of the vote to make it to Cooperstown in his first year of eligibility. His wife Taylor was expecting the couple's seventh son to be born at any moment when the two attended his induction ceremony in Cooperstown, NY on July 29th; as it turns out, he was able to deliver his induction speech without having to leave the podium in order to head to a nearby maternity ward. His son was born a few days later and, appropriately, was named Cooper.

In 2020, he joined ESPN to work as an analyst on baseball telecasts.