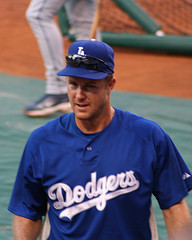 Jeff Kent, the 2000 National League MVP, was a second baseman and five-time All Star whose Hall of Fame credentials are good to excellent. He ended his career with over 500 doubles, 370 home runs, and 1500 RBI's, which would seem to givr him a strong shot at the Hall given his position, although this has not borne out in the actual voting.

As a testment to how unusual he is, of the ten most similar players (based on the similarity scores method, through age 37), only Ryne Sandberg (a Hall of Famer) is a second baseman.

Born in California, Kent went to high school and then college in California before being chosen in the 20th round of the 1989 amateur draft by the Toronto Blue Jays. He led the short-season New York-Penn League with 13 home runs in his first pro season in 1989. Kent played in the Blue Jays minor league system for three years before coming up to the majors in 1992. He showed good power in Single A ball in 1989 and 1990, but struggled a bit in Double A ball in 1991.

Kent was a solid player in the early years, but didn't become a star until he came to the San Francisco Giants when he was nearly 30 years old in 1997. His power went up, but he was not usually in the top 10 in the league in home runs. Instead, he was usually one of the leaders in doubles.

He made the All-Star team 5 times in the period from 1999 to 2005. In 2002, he reported to spring training with a broken wrist. He explained to incredulous reporters that he had sustained the injury while "washing his truck", an expression which for a while reporters took pleasure in using as an euphemism for all sorts of things. The truth soon came out that he had in fact been popping wheelies on his motorcycle and fell. He healed quickly and hardly missed any time while the Giants made it to the World Series that year.

He continued to hit well at an advanced age. In 2005, he was by far the biggest offensive force on the Los Angeles Dodgers, with 36 doubles, 29 home runs, and 105 RBI. Although he has missed 30 games due to injuries in 2006, he was still close to the team lead in home runs. On January 21, 2009 Kent announced his retirement after 17 seasons.

In his first appearance on the Hall of Fame ballot in 2014, he received 87 votes, or 15.2%. This was considered quite low given his resumé, but the ballot was crowded with excellent players, including three other first-timers who gained election that year, Greg Maddux, Tom Glavine and Frank Thomas. In 2015, facing another strong ballot, he dropped to 14%. He then stalled around that mark, with support of 16.7% in 2017, 14.5% in 2018 and then 18.1% in 2019. These were years when the Hall of Fame ballot was particularly strong, with three or four players gaining election every year, a situation that depressed the voting totals of qualified but less glamorous down-ballot candidates like Kent, Fred McGriff, Larry Walker and Gary Sheffield. In 2020, with the logjam cleared, he moved up to 27.5% and in 2021, he increased his total to 32.4%. He moved up to 32.7% in 2022, but with only one year remaining, it was clear he was not going to make it.