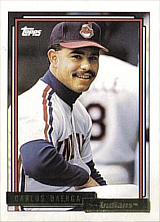 Carlos Baerga was a fifteen-year MLB veteran who hit better than .300 four years in a row with the Cleveland Indians, finishing his career with a .291 batting average.

Baerga, born in Puerto Rico, was signed by San Diego Padres scout Luis Rosa in 1985. In 1986, at the age of 17, he played for the Charleston Rainbows in Single A, hitting .270. The next season, 1987, he was again at Charleston and batted .305, which earned him a promotion to the Wichita Wranglers in Double A in 1988. Hitting .273, he was moved up to Triple A with the Las Vegas Stars where he hit .275. That winter, in a big name trade, he was dealt by the Padres, with Sandy Alomar Jr. and Chris James, to the Indians for Joe Carter.

In Triple A with the Colorado Springs Sky Sox, he played only 12 games, hitting .380 before he was called up early in 1990. He was to stay with the Indians for six major league seasons. His rookie year was modest: he hit .260 with 7 home runs and split his time primarily between third base and shortstop. The next year, 1991, he hit .288, but his slugging percentage remained almost the same at .398. He appeared in virtually every game, splitting his time between third base and second base. 1992 was his breakthrough year at age 23. He pushed his average over .300 to .312/.354/.455, hitting 20 home runs with 105 RBI and 10 stolen bases. He played second base almost exclusively with good range. His offensive numbers are especially notable because it was the last season before expansion, and the league did not post especially big offensive numbers. He was named to the All-Star team and was 11th in MVP voting.

1993 was another good year, as he largely duplicated his previous year's statistics. He hit .321/.355/.486, with 21 home runs, 114 RBI, 105 runs scored, and 15 stolen bases in 19 attempts. Named to the All-Star team again, he was 10th in MVP voting. A switch-hitter, he hit home runs from both sides of the plate in the same inning in a game that season, the first time it had ever been done in the major leagues. It would be 8 years before Mark Bellhorn became the second, and 19 years before the feat would be performed again in the American League, by Kendrys Morales. In the next two years, 1994 and 1995, he hit .314 each time, missing some games each year. He was named to the All-Star team the second year, when the Indians made it to the postseason for the first time since the 1954 World Series. He hit .292 in 15 games during the postseason, in what turned out to be the only postseason of his career. He hit a homer and drove in 9 runs as Cleveland made it to the World Series, where they lost to the Atlanta Braves. As a reflection of the esteem in which the Tribe held him in his prime, he batted 3rd in the lineup in the Fall Classic. Kenny Lofton led off, Albert Belle batted cleanup, Eddie Murray was fifth in the lineup, with Jim Thome usually sixth or seventh.

1996 was an off year for him, and after 100 games he was traded to the New York Mets as part of a deal that netted the Indians Jeff Kent. The Mets put him at first and third base in the 26 games he played that season. In the following two years, 1997 and 1998, he played exclusively at second base for the Mets. His batting average and slugging percentage were well below his peak performance. He signed with the St. Louis Cardinals for the 1999 season and was released before the season began. The Cincinnati Reds signed him and released him in June. San Diego put him in the minors for 21 games, where he hit .286, and brought him up for 33 games, hitting .250 without power. Bought by Cleveland in August, he hit .228 in 31 games with them. Signed briefly by the Tampa Bay Devil Rays in 2000, he did not appear in the majors that year. In 2001, he played in an independent league and Korea. The Boston Red Sox signed him at the end of the year, and he hit .286 without power as a backup in 2002. Signing as a free agent with the Arizona Diamondbacks, he surprised by hitting .343/.396/.464 in 105 games in 2003. The next year, 2004, he slumped to .235 and was released. He joined the Washington Nationals in 2005 and hit .253, marking the end of his playing career.

Over 14 major league seasons (1,630 games) he hit a solid .291. He never drew a lot of walks and his .423 lifetime slugging percentage is misleading because in his prime he regularly was over .450. His career range factor at second base is excellent, although when Washington let him go at the end of 2005, they apparently felt that he had lost his speed and no longer was impressive in the field even though his range at second base was good that year. Additionally, Baerga played in seven Caribbean Series, hitting .296 with 6 homers, 23 RBI and 25 runs in 38 games. He joined Roberto Alomar (a friend since they were teens), Luis DeLeon and Candy Maldonado in being enshrined in the Caribbean Baseball Hall of Fame in 2011. The most similar contemporary player, based on similarity scores, is Edgardo Alfonzo. He was also an infielder who played multiple positions and had a few outstanding seasons with the bat.

The Indians named Carlos one of the second basemen on their "Top 100 Greatest Indians Roster" in 2001. In 2013, he was inducted into the team's Hall of Fame. In 2014, he joined the staff of University of Northwestern Ohio as an assistant baseball coach. He has also broadcast Monday night games and done Baseball Tonight on ESPNDos and ESPN Deportes and was an owner of the Vaqueros de Bayamón.