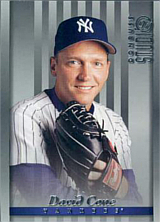 "I like to think of the world’s greatest athlete coming up to bat against me — Tiger Woods, Wayne Gretzky, I don't care who it is — and I’m looking at him thinking, you have no chance." - David Cone, 2001 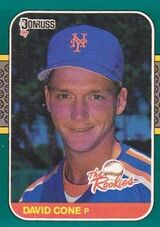 A Kansas City boy, David excelled at football and basketball on his high school team, pitching in the summers due to the school not fielding a baseball team. At 16, he took part in an open tryout at Royals Stadium while also working out for in-state rivals, the St. Louis Cardinals. The Royals took him in the 1981 amateur draft and, despite a lost season due to injury, he reached the big leagues in short order, debuting as a reliever on June 8, 1986 to pick up for Bret Saberhagen against the Minnesota Twins. Initial results proved uninspiring (11 appearances, 5.56 ERA in 22 2/3 innings). It was time for the Royals to make a big mistake.

The New York Mets were blessed with a surplus of catching prospects and were hot off a World Series title in 1986. Ed Hearn, in particular, had caught the Royals' eye as the backup for Hall of Fame backstop Gary Carter. Looking for an upgrade over All-Star veteran Jim Sundberg, the Royals acquired Hearn (plus pitchers Rick Anderson and Goose Gozzo) on the eve of the 1987 season in exchange for Chris Jelic and Cone. Hearn made the Opening Day roster with the Royals and almost immediately suffered a debilitating shoulder injury, playing only 13 games in two seasons with K.C.

Meanwhile, Cone took to New York almost immediately. Nicknamed "George" by teammates for his inability (at first) to not rave about former teammate George Brett, he made 21 appearances and 13 starts in 1987, finishing 5-6 with a 3.71 ERA after missing several months with a fractured pinkie. After starting the 1988 season in the bullpen, David erupted upon Rick Aguilera's bad luck and misfortune. In his first start on May 3rd, he shut out the Atlanta Braves, the first of five victories in five May starts. At 9-2, 2.52 in the first half, he made his first All-Star Game appearance, then kept right on cruising, winning his final eight starts, a streak which included two shutouts and four complete games. David brought his season home at 20-3, 2.22 with 213 strikeouts and 4 shutouts in 231 1/3 innings as the Mets won the NL East with an 100-60 record. In realizing a lifelong dream of doing some sports journalism work for the ensuing showdown with the Los Angeles Dodgers, David (through ghostwriter Bob Klapisch) made the mistake of referring to Dodger ace reliever Jay Howell as a "high school pitcher". With bulletin board material, the Mets ultimately fell in seven games to the Dodgers and particularly charmed hurler Orel Hershiser, who bested David in the Cy Young Award voting.

From those dizzying highs in '88 would come soul-crushing lows. Cone, one of the increasingly few Mets willing to be accountable and approachable to the press, regressed to a still rock-solid 14-8, 3.52 with 190 strikeouts in 1989. In 1990, he was involved in one more of the bizarre moments not just in Mets history but baseball history. On April 30th, facing the Atlanta Braves, Cone covered first base on a Mark Lemke grounder. Umpire Charlie Williams ruled Gregg Jefferies' toss to David was too late to nab Lemmer, and an incensed Cone got right in Williams' face to let him have it. Unfortunately, timeout was never granted and Cone's gaffe allowed other baserunners Dale Murphy and Ernie Whitt to come around and score. Despite a miserable start to the season, with an ERA over 6 entering June, David settled down to come home at 14-10, 3.23 with an NL-leading 233 strikeouts in 211 2/3 innings. He led the NL in strikeouts again in 1991, posting 241 in 34 starts with a 14-14, 3.29 record. On August 30th, he tossed his first immaculate inning, striking out the Cincinnati Reds on nine pitches en route to a 3-2 win at Riverfront Stadium. He saved his best work for his final start, striking out 19 Philadelphia Phillies on October 6th to tie an NL record en route to a three-hit shutout.

By 1992, Cone was the last of a dying breed of stars from the glory days of the 1980s. He was swept up in a series of accusations, including being named in an $8.1 million lawsuit for alleged death threats and lewd sexual misconduct to three female fans (all charges later dismissed). With the team playing miserable baseball, Cone was the Mets lone All-Star, at 13-7, 2.88 with a league-leading 5 shutouts coupled with 217 strikeouts. At the end of August, the Mets sent him to the Toronto Blue Jays for Jeff Kent and Ryan Thompson, where he finished the season with a 4-3, 2.55 line and 44 strikeouts, finishing with a big league best 261 strikeouts. He made four strong starts in the postseason, earning his first ring as the Jays earned their first World Series title, defeating the Atlanta Braves. He entered free agency hoping to return to New York with the Yankees. But, upon learning he was not the team's first choice (Greg Maddux, who spurned them for Atlanta, was), he ended up taking three years and $18 million from the Royals to come home, becoming the best-paid pitcher in the bigs in the process.

Cone's first season back home in 1993 was a good one for him, even with a lack of run support: despite an 11-14 record, his 3.33 ERA was very good and he struck out 191 batters. In the strike-shortened 1994, he was wonderful, crafting a 16-5, 2.94 record with 132 strikeouts and 3 shutouts in 23 starts, winning the Cy Young Award. He was one of the top players in the MLBPA during the tense negotiations with owners, winning several key victories for the players and being a staunch supporter of the injunction granted by Sonia Sotomayor against the allowing of replacement players. His reward? One week after the real players returned, he was dealt again to Toronto for prospects. With a 9-6, 3.38 record in 17 starts for a Blue Jays team on the road to nowhere in 1995, his wish to go back to New York was granted, as the New York Yankees welcomed him to the fold in another prospects-laden deal. Cone was 9-2, 3.82 down the stretch, leading the AL with a combined 229 1/3 innings, and returned to the postseason. In the new postseason round, the ALDS, against the Seattle Mariners, he simply ran out of gas. He picked up a key win in Game 1, tossing 135 pitches, and was pulled in the famed Game 5 after walking Doug Strange to force in the tying run with his 147th pitch. Two innings later, Ken Griffey Jr. made his mad dash home on Edgar Martinez' base hit to send the Yanks home.

Once more, he was a free agent. Initially appearing to have a deal with the Baltimore Orioles locked down, George Steinbrenner swooped in at the final hour to bring him back to the Big Apple with a three-year, $19.5 million deal. He took the ball on Opening Day at Jacobs Field and pitched seven scoreless innings for the W over the Indians, and soon began to be troubled by numbness and blueness in his pitching hand. The eventual diagnosis was an aneurysm in his right shoulder, keeping him down and out until Labor Day weekend. Upon his return against the Oakland Athletics, he spun seven hitless innings, departing due to pitch count restrictions. He finished his season strong, overall going 7-2, 2.88 with 71 strikeouts in 72 innings. In the postseason, he won Game 3 of the World Series, the Yankees' first win en route to a six-game triumph over Atlanta for their first title since 1978.

In 1997, Cone was in fine form over the first three-quarters of the season, making the All-Star team, before spending much of the last one-quarter on the injured list. He finished 12-6, 2.82 in 29 starts, getting blitzed by the Indians in his lone postseason start. After off-season shoulder surgery, he was key in 1998, establishing a new major league record for longest span between 20 win seasons, a big ten years, in finishing 20-7, 3.55 with 209 strikeouts. He had three big wins in the postseason, taking the clinchers in the ALDS and ALCS before winning Game 3 of the four-game sweep of the World Series over the San Diego Padres.

Cone re-signed with the Yankees on a one-year, $8 million deal for 1999. He was an All-Star again, finishing 12-9, 3.44 with 177 strikeouts in 31 starts with a shutout. The shutout came on the magical afternoon of July 18th, with the Yanks facing the Montreal Expos in an interleague battle. Prior to the game, Don Larsen, who had hurled a perfect game in the 1956 World Series, threw the ceremonial first pitch to Yogi Berra, also in attendance for the first time in ages after patching up his differences with George Steinbrenner that had simmered for more than a decade. It may have been "Yogi Berra Day" at Yankee Stadium that day, but the day truly belonged to David, becoming the 16th man to toss a perfect game in major league history.

Sadly, his effectiveness as a big leaguer seemed to wane almost immediately after that moment. He endured a nightmare 2000 season, returning on a one-year, $12 million pact and finishing 4-14, 6.91. He made a lone appearance, retiring Mike Piazza, in the Subway Series win over the Mets. Roger Angell, a writer for The New Yorker who had written quite a lot about Cone in the late 1990s (Angell's book "Game Time" has the article "Style" in it, which is about Cone), was following David that season as the two were working on a book together. A Pitcher's Story: Innings with David Cone was a compendium of their running dialogue through David's ongoing nightmare. His time was up with the Yankees, so he moved along to their bitter rivals, the Boston Red Sox, with a respectable 9-7, 4.31 in 25 starts in 2001. His last vintage Cone performance came against the Yanks on September 2nd, dueling Mike Mussina but falling just short with a skinny unearned run in 8 1/3 innings in a 1-0 loss at Fenway Park. After sitting out 2002, he made a brief comeback with the Mets in 2003, retiring in May with a 1-3, 6.50 record in 5 games, his body unable to handle the rigors of big league pitching any longer.

Cone, who counted a slider and a split-fingered fastball (learned from Ron Darling with the Mets) among his best pitches, finished his career with a 194-126 record, 3.46 ERA and 2,668 strikeouts in 450 games. He remains the only man to win 20 games for the Mets and Yankees as well as the last man in Yankee history to put together back-to-back 200 strikeout seasons. Similarity scores place a series of strong pitchers among his most similar, including Zack Greinke, Kevin Brown, Justin Verlander, Dave Stieb and, at most similar, his former New York Mets co-ace, Dwight Gooden. Despite a strong 103 score on Bill James Hall of Fame Monitor, Cone only received 3.9% of the vote in 2009 Hall of Fame voting and fell off the ballot, his fate lying with the Veterans Committee.

In retirement, David was able to rejoin the YES Network as a broadcaster in 2008, after having done some work for them in 2002 between his Red Sox and Mets seasons. He currently serves as the lead commentator with Michael Kay and fellow Yankee great Paul O'Neill. On July 19, 2009, he testified in support of Sonia Sotomayor's nomination at a hearing before the Senate Judiciary Committee, after her nomination for a Supreme Court vacancy by President Barack Obama.