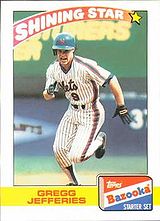 Gregg Jefferies played fourteen seasons in the major leagues, hitting .289 lifetime. A two-time All-Star, he broke into the majors as its youngest player with the New York Mets in 1987, led the National League in doubles in 1990, and hit .342 with the St. Louis Cardinals in 1993. A multi-position player, he appeared in 380 games at first base, 369 in left field, 346 at second base, and 277 at third base as well as a number at DH.

Signed by the Mets and scout Roy Partee as the first round pick of the 1985 amateur draft, Jefferies found success at every level of the minors while advancing through the Mets system. He made his pro debut in 1985 with the Kingsport Mets, hitting .343 and being named Appalachian League Player of the Year. He spent the majority of the next season with the Lynchburg Mets, where he hit a league-leading .354 with 11 home runs and was named the Carolina League Most Valuable Player.

In 1987, with the Jackson Mets, he hit .367 with 20 homers and 101 RBIs and won the Texas League MVP award, his third in three years. Late that season, he got his first taste of the majors, appearing in six games with the Mets as a pinch hitter and getting three hits. Jefferies spent most of 1988 with the Tidewater Tides, hitting .282 with 7 home runs before getting another late season call-up with the Mets. In the majors, he hit .321 with 6 homers and was tied for sixth in National League Rookie of the Year voting, despite only playing in 29 games.

Jefferies became the Mets starting second baseman in 1989, when he hit .258 with 12 home runs and 21 stolen bases and finished third in that year's Rookie of the Year balloting; he had entered the season as the favorite of many to win the award. He was a Mets regular for three seasons before being traded to the Kansas City Royals following the 1991 campaign.

After one year as the Royals primary third baseman in 1992, he was traded again, this time to the St. Louis Cardinals. Primarily playing first base with the Cards, he had his two best big league seasons, hitting over .320 in 1993 and 1994 (and finishing in the National League top ten in batting average both years) and making the All-Star team twice. 1993 proved to be his career year, as he hit .342 with 42 stolen bases and finished in the top 10 in voting for the National League MVP Award.

Jefferies later went on to play with the Philadelphia Phillies, Anaheim Angels, and Detroit Tigers. After missing most of the 2000 season due to injuries, he retired as a player at the end of that year.

Jefferies' son, Jake Jefferies, was drafted by the Washington Nationals in the 2012 amateur draft, but continued on to California State University, Fullerton [1]. His father, Rich Jefferies, had played briefly in the minor leagues.