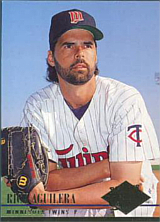 "When they want a batter filled with terror, they call on me: Rick Aguilera. Slider's hot when I'm on the mound; with cool control I mow 'em down." - Rick's debut on wax, 'Get Metsmerized'

After finding some success early in his career as a starter, Rick Aguilera went on to become one of baseball's top closers of the 1990s. Aguilera was known to throw a low 90s fastball, a hard slider, and a splitter. He primarily wore number 38 during his career.

Originally selected by the St. Louis Cardinals as a third baseman in the 37th round of the 1980 amateur draft out of high school (where he was MVP as a junior and senior) Aguilera opted instead to attend BYU, where he became a pitcher. He was signed as a third round pick in the 1983 amateur draft by the New York Mets and scout Roy Partee. He reached the majors in June 1985 and soon was a member of the Mets rotation. He found immediate success, going 3-1 with a 0.89 ERA in five July starts, and ended the year with a 10-7 record and 3.24 ERA while hitting an impressive .278.

Aguilera once again won 10 games in 1986 as the Mets won the National League pennant. He could have been the goat of the World Series. He allowed a homer to Dave Henderson and another run that put the Boston Red Sox ahead 5-3 in the 10th inning of the memorable Game 6. Instead, the Mets' improbable rally gave Aggie the win, and the Mets captured the Series in seven games. He struggled with injuries over the course of the next two seasons, appearing in only 18 games in 1987 and 11 games in 1988. Despite limited duty in 1987, he ran off a streak of seven straight winning starts that lasted from May 20 to September 19. The Mets moved him to the bullpen in 1989. During that year's pennant drive, he was traded along with Kevin Tapani to the Minnesota Twins for Frank Viola. One of the reasons the Mets traded him was their belief that his arm could not bounce back quickly as a reliever. They were sorely mistaken.

After starting 11 games for the Twins in 1989, skipper Tom Kelly moved Aguilera to the bullpen in 1990 to replace closer Jeff Reardon. He was an immediate success, notching at least 30 saves in the next four seasons and earning appearances at the All-Star Game from 1991 to 1993. He also starred for the World Champion Twins in 1991, recording 3 saves in the ALCS and 2 saves and a win in the World Series. Following a late season trade to the Boston Red Sox in 1995, Aguilera returned to the Twins as a free agent the next year and joined the rotation. After an 8-6 campaign as a starter, he moved back to the bullpen in 1997. In 1999, with free agency looming, he was traded to the Chicago Cubs for Kyle Lohse. He was re-signed by the Cubs after the season and spent one more year in the majors. Aguilera had 254 saves for the Twins during his career, which was the franchise record until 2011, when Joe Nathan passed him.

Aguilera contributed to the New York Mets rap single, "Get Metsmerized", recorded after the first game of the 1986 season. Jeff Pearlman, in his chronicle of that season, The Bad Guys Won, accurately muses that Aguilera was the only Met participant that grasped the concept of rhyming with the beat.

As of 2008, Aguilera is head baseball coach at Santa Fe Christian Schools in Solana Beach, California. He was inducted into the Minnesota Twins Hall of Fame in 2008.