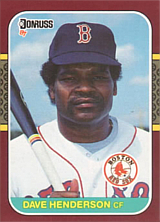 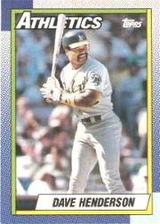 Dave Henderson, the nephew of Joe Henderson, played 14 seasons in the major leagues, hitting 197 home runs. Henderson is well remembered for his enthusiastic style of play and his broad, gap-toothed grin. He delivered two clutch home runs for the Boston Red Sox in the 1986 postseason and could have been the man who brought them their long-awaited championship. Instead, Boston had to wait another 18 years.

Henderson began his major league career with the Seattle Mariners, mostly as a part-time player with a decent bat. In 1986, he was part of a major trade. The Red Sox traded promising young shortstop Rey Quinones along with prospects to Seattle for Henderson and Spike Owen. It was one of the best moves GM Lou Gorman made with the Red Sox and may have been related to his relationships with the Mariners, for whom he was previously GM.

The trade was key for the Red Sox's 1986 pennant drive as Quinones was not ready to be an everyday shortstop and Henderson was needed to fill in for the aging Tony Armas in center field. Henderson was not able to contribute much during the regular season but had a major impact in the postseason. During Game 5 of the 1986 ALCS, Hendu hit a two-out, two-strike, go-ahead two-run blast off Donnie Moore in the top of the 9th inning with the California Angels one strike away from the World Series. After that blast, Dave made a memorable spinning leap. He then hit a sacrifice fly that won the game in extra innings. In Game 6 of the 1986 World Series, Henderson hit the go-ahead homer off Rick Aguilera in the 10th inning before the New York Mets staged their miraculous rally.

In 1987 Henderson struggled for the Red Sox and was traded late in the season to the San Francisco Giants for Randy Kutcher. Despite many opportunities early in his career, he did not emerge as an everyday player until the age of 30 when he signed with the Oakland Athletics as a free agent in 1988. With the A's, he actually became a minor star on their World Series teams from 1988 to 1990. 1988 was his career year, when he hit .304 with 24 HR and 94 RBI. He missed almost the entire 1992 season with an injury, but came back to post one more relatively productive year in 1993. Henderson played his final season with the Kansas City Royals in 1994.

Henderson passed away at Harborview Hospital in Seattle, early on December 27, 2015, after suffering a massive heart attack. Henderson had been dealing with kidney issues for the past few years and had received a kidney transplant a month earlier.