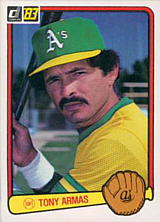 The brother of Marcos Armas and father of Tony Armas, Jr., outfielder Tony Armas was a major star in the 1980s who twice led the league in home runs. From 1980 to 1985, he paced all American Leaguers with 187 homers.

Armas was signed by the Pittsburgh Pirates in 1971 and reached the majors in 1976, appearing in 4 games with the club. Prior to the next season, he was traded to the Oakland Athletics as part of a nine player deal, and he soon became a regular. In 1980, he had one of his best seasons, hitting .279 with 35 homers and 109 RBI, and the next year, he led the American League with 22 homers in the strike-shortened campaign. After the 1982 season, Armas was traded to the Boston Red Sox. In his first year in Boston, he hit 36 home runs and drove in 107 runs, and the next year paced the AL with 43 homers and 123 RBI. He was released after the 1986 season and finished his career with 3 seasons with the California Angels.

Armas hit only 251 home runs lifetime, primarily because he only appeared in more than 140 games three times during his career and missed 302 games in injured list stints. He was the all-time Caribbean Series home run leader with 11 but had his record broken in 2008 by Miguel Tejada. He also held the Venezuelan League home run record with 97, but this was topped by Robert Pérez in 2006-2007. He is a member of both the Caribbean Baseball Hall of Fame and Venezuelan Baseball Hall of Fame.