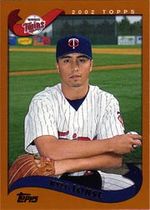 Lohse was not in high demand on the free agent market following a so-so 2007 season, when he was a combined 9-12, 4.62 between the Reds and Phillies, and finally signed a one-year contract with the St. Louis Cardinals for 2008. He turned out to be an excellent pick-up, putting up the best numbers of his career for the Cardinals: in 33 starts, he went 15-6 with a very good 3.78 ERA. He set personal bests for both wins and ERA, topped 200 innings pitched for the second time of his career, and while never a strikeout pitcher, he posted a solid K/W ratio of better than 2 to 1. However he regressed in 2009, ending the year at 6-10, 4.74 in only 23 games.

On April 27, 2010, he was pressed into action as an outfielder in a marathon 2-1 loss to the New York Mets. When the 18th inning started with the game still scoreless, the Cardinals had no more pitchers available, so manager Tony LaRussa sent infielder Felipe Lopez to the mound, with Lohse filling the open spot in left field; Lohse had pitched 7 innings two days earlier and was not available for mound duty. He made two putouts and went 0 for 1 at the plate over the next three innings, until the Cardinals finally lost the game 2-1 with outfielder Joe Mather now trying his luck toeing the pitching rubber. Lohse was sidelined by a rare condition later that season, being diagnosed with exertional compartment syndrome in his right forearm. He was placed on the disabled list on May 27th and was ineffective when he returned to action, ending with a record of 4-8, 6.55 in 18 starts.

Lohse came back strong in 2011. He was 6-0 after his first 10 starts, with a minute ERA, making him one of the top pitchers in the National League in the early going. He finished the season with a record of 14-8, 3.39, in 30 starts. Even though the Cardinals surprised everyone by winning the 2011 World Series after being seemingly out of the playoff race in mid-August, Lohse did not pitch particularly well in the postseason. He was the loser in his only starts in both the NLDS and NLCS, and was roughed up for 3 runs in 3 innings in a Game 3 start which was his only appearance on the mound in the World Series. The Cardinals lost that game, 16-7, to the Texas Rangers but Lohse made a key contribution to the their win in the epic Game 6 contest. He was called on as a pinch-hitter in the bottom of the 10th inning, with the Cards trailing 9-7, two runners on and no one out. He laid down a sacrifice bunt against Darren Oliver, advancing both runners one base; they both came in to score before the end of the frame, tying the game and denying the Rangers a World Championship. When David Freese ended the game with a walk-off home run in the bottom of the 11th, it set the stage for a Game 7 showdown. Manager Tony LaRussa went with ace Chris Carpenter to start the contest, and he responded with a win to clinch the Championship.

In 2012, Lohse was given the starting assignment on Opening Day after Carpenter went down with an injury in spring training. It was a historic occasion, being the first game played at the new Marlins Park and the first played by the Miami Marlins under their new name. Lohse was outstanding, not giving up a hit until the 7th and being credited with his team's 4-1 win. It was the beginning of an excellent season for Lohse, who ended the year with a record of 16-3, 2.86. He had the best winning percentage in the National League, while pitching 211 innings and striking out 143 against only 38 walks. He was called upon to start the first-ever National League Wild Card Game on October 5th and he earned a 6-3 win over the heretofore unbeatable Kris Medlen of the Atlanta Braves. He continued with an excellent performance in the Division Series, when he pitched 7 innings against the Washington Nationals, giving up only one run while striking out 8 in Game 4, although he ended up with a no-decision. He won Game 3 of the NLCS facing the San Francisco Giants, 3-1, but lost Game 7 when he gave up 5 runs in only 2 innings as the Giants completed their comeback from 3 games to 1 down with a 9-0 shutout that sent them to the 2012 World Series.

Lohse and his agent Scott Boras decided to play hard ball heading into 2013, holding out for a multi-year contract with a salary reflecting his recent success. However, no team was ready to offer him that, and as spring training was winding down, he was still unsigned, working out daily at a community college near his home and waiting for a team desperate for starting pitching to give him a panicked call. For his part, Boras blamed baseball's new free agent compensation system for his client's plight. He finally found a team on March 25th, signing a three-year deal with the Milwaukee Brewers worth $33 million. He earned his first win for the Brewers on April 22nd, defeating the San Diego Padres, 7-1, in spite of having to leave in the top of the 6th inning with a dislocated pinky finger, the result of a baserunning collision with Padres 2B Jedd Gyorko. Lohse explained that the the injury was a recurrent one and that he would have continued to pitch, except the finger did not pop back into place immediately. After a slowish start, he got stronger and stronger as the season progressed, topping things with a masterful two-hit shutout of the Atlanta Braves on September 25th, in which he required only 89 pitches to go the full nine innings. He finished the season with a record of 11-10, 3.35. He had an even better season in 2014, finishing the year at 13-9, 3.54 in 31 starts. Both seasons, he just missed the 200-inning threshold, by fewer than two innings both times. He was named the Brewers' opening day starter in 2015. During the season, he became one of a small group of pitchers to have recorded a win against all 30 major league teams.

In May 2018, he had not pitched in the majors since the middle of the 2016 season, but he still managed to get some publicity when he announced his retirement by sending a message on a social network, while enjoying a beer and watching a minor league baseball game. He had made a couple of starts for the AAA Omaha Storm Chasers that season, but when the Royals released him, he decided that, at 39, he should move on and chose that very chill way of announcing it.